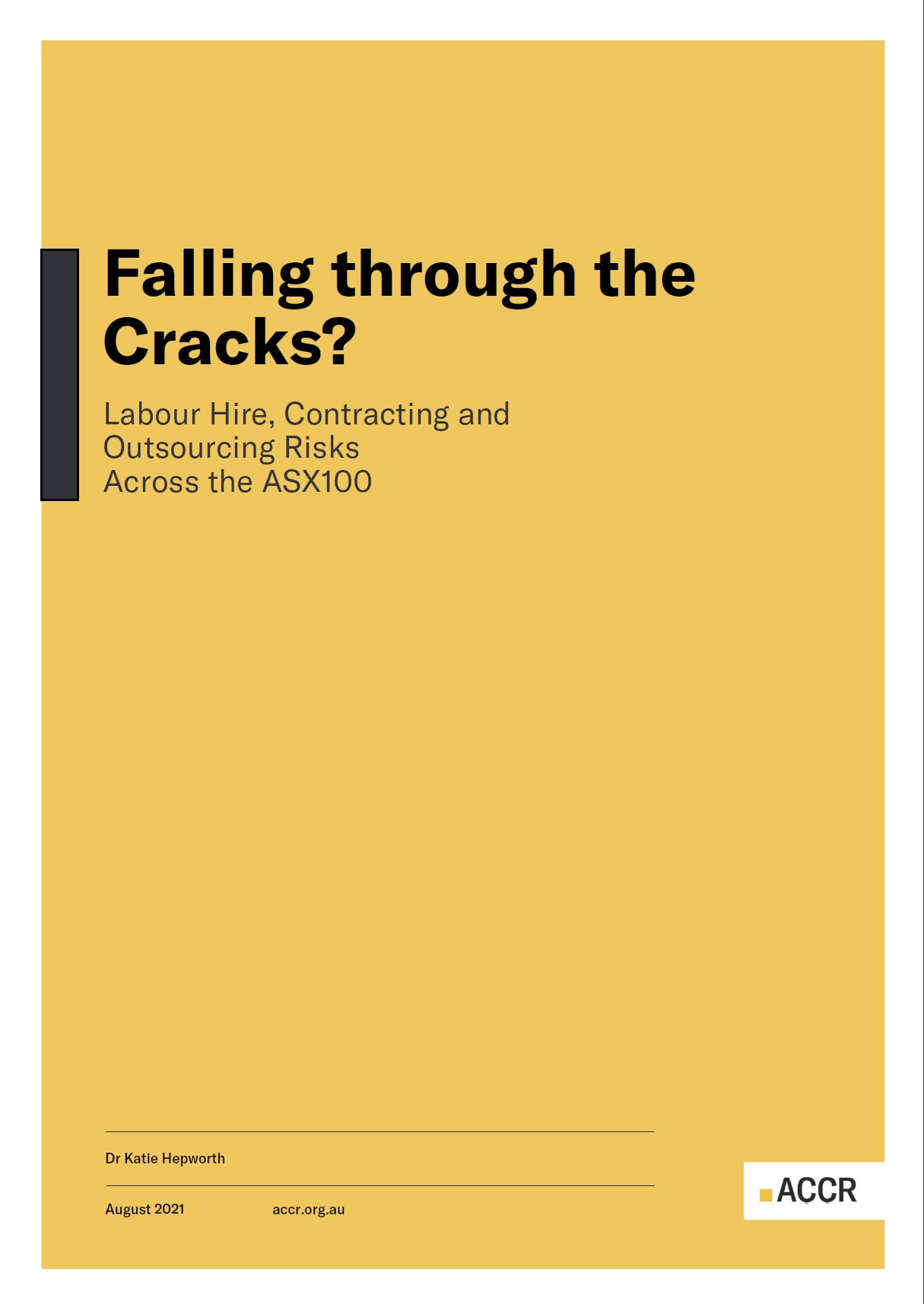 Increasingly, the boundaries of a company’s workforce stretch beyond its direct employees, to include a range of indirect workers, such as: labour hire agencies, subcontractors, service contractors, independent contractors, and even gig economy workers. Many companies now outsource a large proportion of their activities to other businesses (which in turn, often outsource again).

It is difficult to ascertain the precise size of Australia’s indirect workforce. For instance, the Australian Parliamentary Library notes that the true numbers of labour hire workers in Australia may be underreported, partly due to these workers’ confusion about their own employment relationships, and “whether they are being paid by a labour hire firm or the organisation they are on-hired to”.[2]

A Note on Terminology

ACCR’s 2020 report, Labour Hire and Contracting Across the ASX100, focused on two types of indirect employment arrangements: labour hire and contracting. These arrangements were understood broadly as “triangular employment arrangements” involving three parties: a worker; a host company; and an intermediary, such as a labour hire agency. In the ‘standard’ form of this triangular arrangement, the host company contracts an intermediary to provide them with labour. The intermediary then contracts a worker to provide that labour, and is responsible for paying the worker.

Since the release of ACCR’s 2020 report, the Global Reporting Initiative (GRI) has released a draft of their new Universal Standards. Following an extensive, multi-year consultation process, the new standards were sent to the Global Sustainability Standards Board (GSSB) to be approved on 10 June 2021.[7]

The updated standards provide clarity on the definition of “worker”, and indicate that in addition to employees (disclosure 2.7), GRI will be recommending that companies report on “the total number of workers who are not employees and whose work is controlled by the organization” (disclosure 2.8).

This definition includes, but is not limited to: agency workers; apprentices; contractors; home workers; interns; self-employed persons; subcontractors, and volunteers.

The GRI also specifies that companies should report on “fluctuations” in employee and non-employee numbers over the reporting period, to allow investors to understand how numbers change over time and the reasons for that change (e.g. seasonal events, conclusion of a temporary projects, etc).

In 2020, ACCR developed a framework to guide companies on the types of material and materiality-based disclosures that would provide investors with sufficient information to assess their employment model and workforce strategy. ACCR recommends that companies use the new GRI definitions for the indirect workforce.

Employers may choose to turn to indirect employment arrangements for a number of reasons, including reducing labour costs, accessing specialised workers, adapting to labour market volatility, shifting liabilities away from the organisation, and even, to undermine or circumvent union presence.[9] However, in doing so, they may increase their exposure to a range of workforce, business and operational risks. These include:

These risks have been highlighted in key instances over the last 12 months. For example:

Labour hire and subcontracting arrangements were a key factor in COVID workplace transmission during Melbourne’s second wave, as detailed in our investor brief, Broken chains of responsibility: Victorian COVID-19 Clusters reveal Subcontracting Risks.[11] While the role of security subcontracting in the original ‘leak’ of the virus is widely known, less well-known is the way in which the use of labour hire exacerbated transmission at other key sites. This includes: the Cedar Meats cluster, where critical health and safety information was not communicated between state public health authorities, the host company and the labour hire agency, leading to delays in notifying close contacts and closing the site for cleaning; Toll Group’s Kmart warehouse, where it is alleged that the company refused to share information with employees about positive cases amongst the labour hire workforce, as the positive workers were not Toll employees.[12]

The Grosvenor mine explosion in May 2020, where five workers were seriously injured at a Queensland coal mine. The subsequent government inquiry (2020–21), which investigated factors contributing to the explosion, noted that the use of labour hire and contract work arrangements played a role in safety issues that led to the explosion:

There is a perception among coal mine workers that a labour hire worker or contractor who raises safety concerns at a mine might jeopardise their ongoing employment at the mine [and]... the existence of a perception, no matter how widespread, creates a risk that safety concerns will not always be raised.[13]

The inquiry noted that labour hire and contract work arrangements have been increasingly used by employers in the Queensland coal mining industry since the mid-1990s for ‘core work, rather than specialist work’.[14] It found that these arrangements are associated with: higher incidence of injuries and fatalities; workers’ poorer physical and mental health; greater reluctance by workers to raise OHS concerns; more complex inter-organisational chains of responsibility; and reduced access to complaint mechanisms, health services, statutory entitlements to protections and benefits, return to work pathways, and representation.[15]

Furthermore, it found that performance bonuses for labour hire and contract workers may have led to adverse safety outcomes, and have led to an under-reporting of safety incidents and injuries.[16]

In June 2021, the Sydney Morning Herald reported on the Commonwealth Bank and National Australia Bank’s use of labour hire workers in their financial crimes unit. Drawing on interviews with current and former employees, the article reported that contractors were threatened with sudden termination if they failed to meet KPIs,[17] and that the “financial crimes department was ‘numbers-driven’ with teams encouraged to compete against each other by clearing a certain number of alerts per day”.[18] While the Commonwealth Bank has argued that it has since reformed staff KPIs to focus on the ‘quality’ rather than ‘quantity’ of completed investigations, questions must be asked about the extent to which precariously employed staff feel willing to raise concerns about practices within the team. Significantly, the SMH reported that ANZ and Westpac only use permanent staff to fill these compliance roles.[19]

In September 2020, Qantas announced that it would be outsourcing ground handling work across 90% of its operations.[20] The Transport Workers’ Union (TWU) had an opportunity to submit a bid to keep the ground handling operations in-house. However Ernst & Young, which was engaged to prepare the workers’ bid, described the conditions Qantas placed on the bid as ‘unattainable and unrealistic’.[21]

On 30 July 2021, the Federal Court found that the company had breached adverse action provisions under the Fair Work Act (FWA) in outsourcing over 2,000 ground handling jobs, with the company’s decision at least partially motivated by wanting to “prevent the exercise by the affected employees of their workplace right to organise and engage in protected industrial action and participate in bargaining in 2021”.[22] The judge also referred to references in Qantas’ own documents that there was a “vanishing window of opportunity” to outsource the work.

Significantly, Qantas’ own internal documents recognised that the decision to outsource during the pandemic, and while the company was in receipt of significant government subsidies, may have a significant negative impact on their brand and was a critical risk.[23]

Qantas immediately announced plans to appeal, while the Transport Workers’ Union urged the judge to order Qantas to reinstate and compensate the workers.