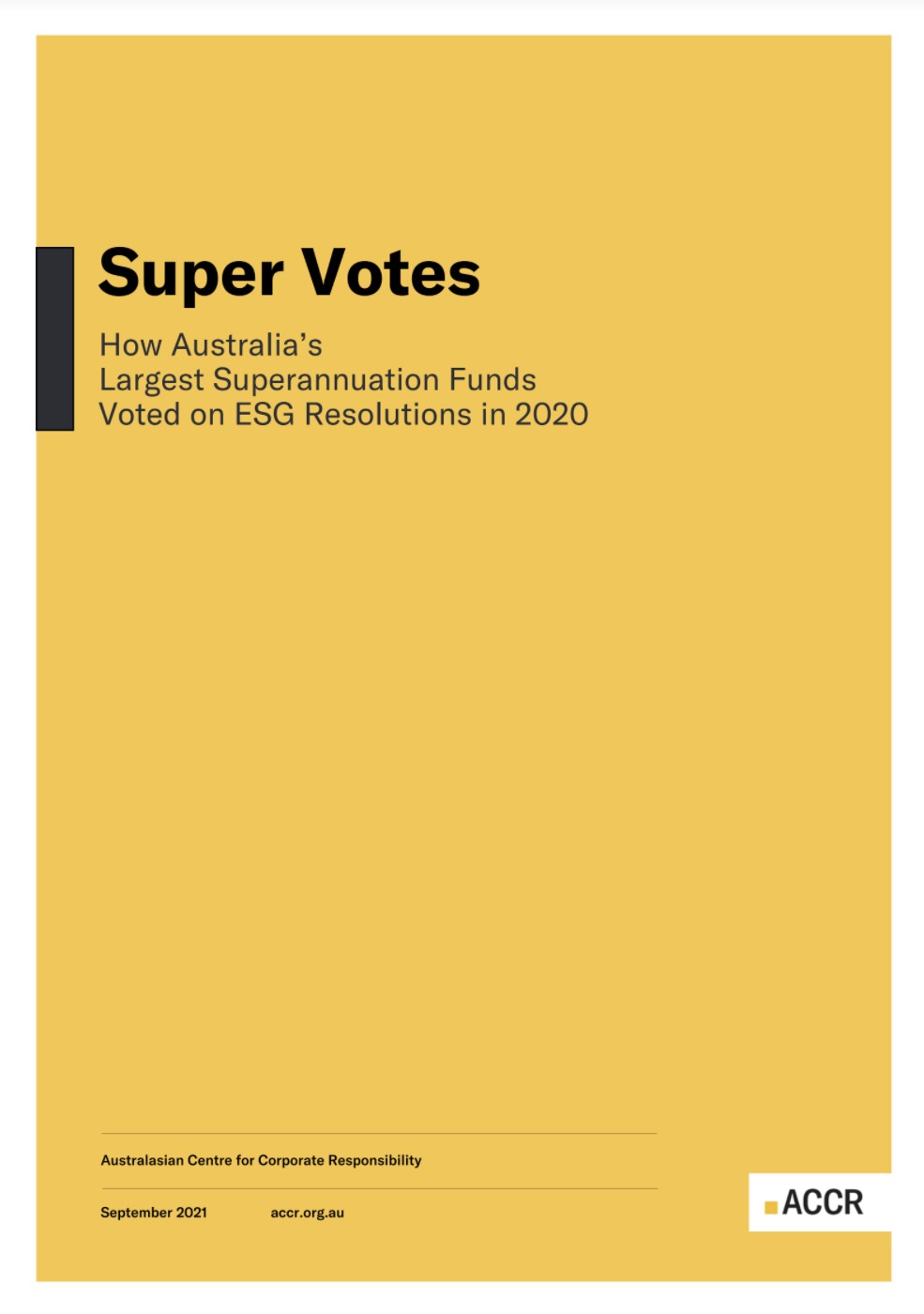 This is the third report by the Australasian Centre for Corporate Responsibility (ACCR) on the voting behaviour of Australia’s 50 largest superannuation funds — it follows our Vote Like You Mean It[1] report in 2019 and our Two Steps Forward, One Step Back[2] report in 2020. Through these reports, ACCR has analysed shareholder proposals relating to environmental, social and governance (ESG) issues filed at 307 companies since 2017.

ACCR advocates for investment managers and asset owners to use every tool in their toolkits to achieve the best outcomes when engaging with companies on ESG matters — including voting on shareholder resolutions.

Since our first report in 2019, we have seen growing acceptance of the role of shareholder resolutions as a key element of active stewardship. In advice released by PRI in March 2021, proxy voting was identified as an important lever that allowed funds to provide clear and transparent feedback to a company, and as such, a tool that should be used alongside ordinary engagement. Also in 2021, BlackRock emphasised a new "sense of urgency" and made a public commitment to vote in favour of climate and social resolutions more often.[3]

Of course, this does not suggest that voting in favour of every shareholder proposal necessarily represents sensible or progressive voting behaviour. Rather, funds should consider proxy voting as an integral part of company engagement, one which should be governed by clearly defined principles and policies. Funds must also adequately disclose their voting records, to allow their members to monitor their stewardship performance. These disclosures would also be of benefit to a broader range of stakeholders, with ASIC arguing that they would support the “gatekeepers” of the $3 trillion superannuation industry — the advisors, the analysts and the media — to better monitor fund performance.[4]

The aim of this report is to highlight the disclosure and voting practices of the 50 largest super funds in Australia, emphasising the importance of:

Our recommendations promote the importance of proxy voting and disclosure, and aim to improve consistency in reporting across the industry.

As ESG resolutions increase in number, prominence and impact, ACCR's extensive archive of super fund proxy voting records, dating back to 2017, continues to be a critical source for journalists, academics and investors wanting to understand corporate governance issues and trends in Australia and abroad.

In the interests of transparency, ACCR has published the complete dataset underlying the report on our website.

On voting by industry association members:

ACCR is releasing the full dataset that underlies this report with an Open Data License, in the spirit of transparency and to encourage the disclosure we recommend in the report.

The dataset, Super Fund Voting 2017-20, is available to use under the Open Data Commons Attribution License v1.0. We encourage you to access, analyse, and create new research with this dataset, on the condition that you attribute ACCR as its source and make the license conditions clear to others. Read more about this license at opendatacommons.org.

This dataset is 36,170 rows, with each row representing a vote by a super fund on a shareholder resolution.

Read more about the methodology in the report.

This dataset is 960 rows, with each row representing a shareholder resolution that was covered in this report. Read more about the methodology in the report.

This dataset is 51 rows, with each row representing a super fund. Read more about the methodology in the report.