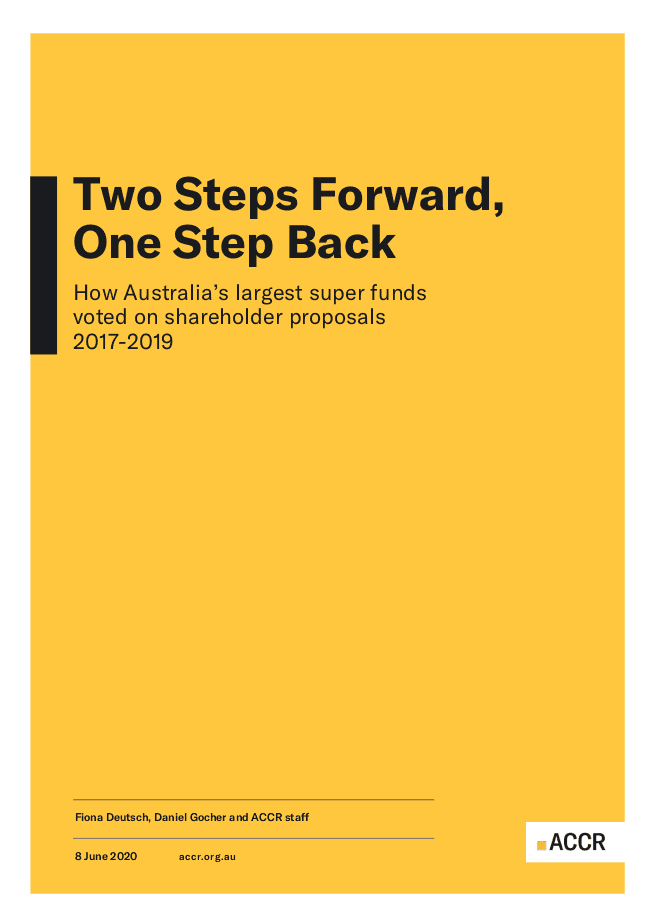 Prior to the significant declines in stock markets around the world in early 2020, the Australian superannuation industry controlled close to $3 trillion (including self-managed super funds). Yet despite the sector’s size and influence, the disclosure practices of the majority of funds remain inadequate.

Super funds are major shareholders in listed companies, and they are entitled to vote on all itemson the agenda at company AGMs, including shareholder proposals. Shareholder proposals tend to address issues of broad public concern, such as climate change,workers’ rights, human rights, and corporate political influence. These issues are relevant to super fund members and the society they live in and will retire into. Yet many of Australia's largest super funds do not disclose how they vote on such proposals, or if they bothered to vote at all, let alone their reasons for casting their vote in a certain way.

In recent years, super funds have used their influence to remove directors at listed companies including AMP and Westpac. They have also effectively exercised their rights-by voting against remuneration reports-to force change in boardrooms. However, it is usually months after the AGM headlines before the general public can learn how their super fund voted at a company meeting.

The Australasian Centre for Corporate Responsibility (ACCR) has analysed the proxy voting decisions of Australia’s 50 largest superannuation funds on 686 shareholder proposals filed at companies in Australia, Canada, Norway, the United Kingdom (UK) and the United States (US) between 2017 and 2019. All of these proposals related to environmental, social and governance (ESG) issues. This report builds upon ACCR’s ‘Vote Like You Mean It Report’ in 2019, and Market Forces’ proxy voting research in 2018.

The purpose of this research is not to suggest that funds should support every shareholder proposal. Rather, it seeks to highlight the clear correlation between funds with responsible investment practices and support for shareholder proposals. Funds that are engaged on ESG issues are clearly more likely to vote for improved ESG outcomes.

For the first time, ACCR has also analysed the voting records of funds based on the outcome of each proposal—the results were striking. While it seems obvious that more funds supporting a proposal would contribute to a higher vote, 20 per cent stands out in the research as a tipping point; that is, many funds were far more likely to support a proposal where overall support was greater than 20 per cent. This suggests that there is a common understanding of materiality of issues raised by shareholder proposals.

The growth in funds marketing themselves as responsible or sustainable investors is well documented. While shareholder proposals make up just a small proportion of all votes cast by a fund in any given year, further research comparing funds’ entire voting records to their sustainability claims is warranted.

Given the maturity and size of the Australian superannuation sector, greater transparency about how and why funds exercised their voting rights is warranted.Our recommendations for increasing fund transparency are presented on page 6 of this report. In the interests of transparency, ACCR will publish the complete dataset underlying this report on its website.

ACCR is releasing the full dataset that underlies this report with an Open Data License, in the spirit of transparency and to encourage the disclosure we recommend in the report.

The dataset, Super Fund Voting 2017-19, is available to use under the Open Data Commons Attribution License v1.0. We encourage you to access, analyse, and create new research with this dataset, on the condition that you attribute ACCR as its source and make the license conditions clear to others. Read more about this license at opendatacommons.org.

This dataset is 21,083 rows, with each row representing a vote by a super fund on a shareholder resolution.

Read more about the methodology in the report.

This dataset is 686 rows, with each row representing a shareholder resolution that was covered in this report. Read more about the methodology in the report.

This dataset is 51 rows, with each row representing a super fund. Read more about the methodology in the report.