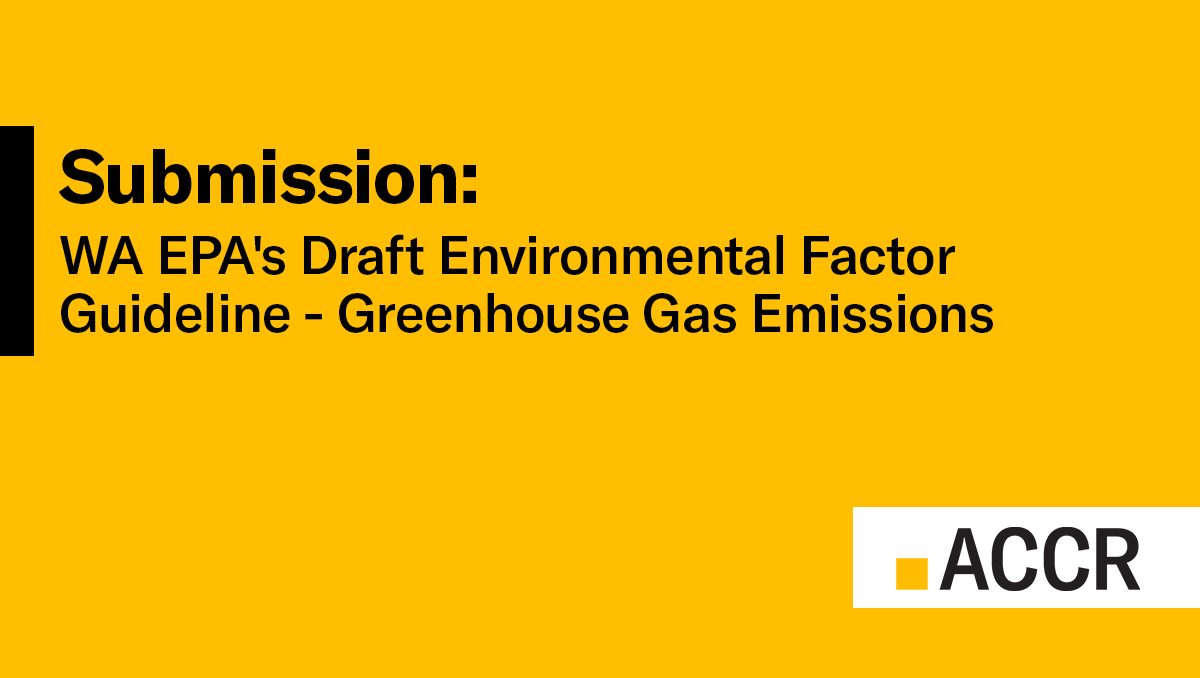 ACCR acknowledges that the draft revised Environmental Factor Guideline covering Greenhouse Gas Emissions (EFG) is an improvement. However, it fails to sufficiently address scope 3 emissions, and is too permissive of scope 1 emissions and the use of offsets.

ACCR's Appeal against the NWS Extension proposal is applicable to this proposal, and is referenced throughout.[1]

1. Are there any additional measures which should be included to meet the EPA’s objective?

The EPA’s draft revised Environmental Factor Guideline covering Greenhouse Gas Emissions (“EFG”) aims 'to minimise the risk of environmental harm associated with climate change by reducing greenhouse gas emissions as far as practicable.' In order to achieve this objective, in ACCR's view the EPA must take the following measures:

Scope 3 emissions should be rigorously conditioned in a way that reflects the role of these emission sources under the 1.5C future that the EFG advocates for.

As such, scope 3 emissions should be much more thoroughly considered than is currently proposed. The EPA should be assessing the activities of WA applicants with a view that all emission impacts matter.

At a company level, Woodside produced 25.8 million tonnes of hydrocarbons in 2021.[4] When combusted this will create about 75 MtCO2-e of GHG emissions, most of which will occur in other countries. This is comparable with all of WA’s local GHG emissions.

Chevron operates similar sized LNG facilities to Woodside (but does not disclose WA specific data). Iron ore miners and alumina producers also have significant scope 3 emissions that physically occur outside of WA’s border, but contribute to climate change but should be subject to regulation under the WA Environmental Protection Act (EP Act).

Since industrial scope 3 emissions, produced by facilities subject to the WA Environmental Protection Act, are more significant than all of WA’s domestic emissions, the EFG should require that they are thoroughly assessed and conditioned. The recommendations in the EFG are however limited to disclosure and ‘consideration’ of options to reduce. This dramatically hampers the EFG’s ability to protect the environment and runs counter to the objective of the EFG.

Scope 3 emissions should trigger assessment under the EFG by modifying the GHG threshold so that proposals should be assessed under the EFG if the the sum of scope 1, 2 and 3 emissions is greater than 100,000 tCO2-e in any given year.

Many other research papers draw similar, if not sterner, conclusions to the IEA’s NZE. Kühne et al[6] finds that the coal, oil and gas carbon bombs that are already producing will exceed the world’s 1.5°C budget. Other studies, using different methods and data sets, have concluded that there is no room for additional fossil fuel development if we are to meet the objectives of the Paris Agreement. Some of these, such as Unburnable Carbon[7] are over a decade old. Some assess company reserves disclosures, while others look at fossil fuel consuming infrastructure.[8] Some, such as Muttit[9], assess 1.5°C and 2°C scenarios. Welsby[10] also looks at sensitivities for CCS and specific sectoral decarbonisation paths.

Scope 3 emissions other than from fossil fuels may have a more resilient future in a 1.5C world, including alumina and iron ore. Where commodities have a sustained role in a 1.5C, net zero economy, appropriate development may be consistent with a 1.5C scenario. The measures outlined in the EFG could be more appropriate for these commodities.

In either case, all sources of scope 3 emissions should be compliant with net zero by 2050 (or earlier), in line with the climate science referenced in the EFG and the state’s major project GHG policy. The type of conditions that could be recommended to achieve net zero by 2050 could be on the duration and output of the proposed facilities. In the absence of alternative conditions that result in scope 3 emissions being consistent with a 1.5C scenario, facilities should be required to cease operating by 2050, with a linear ramp down between now and then. This would mirror the approach taken for scope 1 emissions and would be a constructive step, even if the EPA is not willing to follow the IEA’s NZE conclusions.

The EFG notes that the IPCC requires a 45% reduction in emissions between 2010 and 2030. Facilities could be required to ensure that they achieve a 45% lower emissions intensity than the values published for the SGM, by 2030.

Recommendations for existing projects could be based on 45% absolute emissions reductions, which would be better aligned with the IPCC recommendations. Assessment in these instances, would however need to consider whether this reflected a genuine improvement in performance, rather than simply reflecting a reduction in throughput.

Constrain the use of credits as offsets

The use of carbon credits to offset emissions is flawed for a number of reasons that have been articulated in ACCR’s NWS Appeal and Safeguard Mechanism submission.[13]

In accordance with the WA Greenhouse Gas Emissions Policy for Major Projects (State Policy[15]), proposals should demonstrate how they contribute to WA achieving net zero by 2050. This should include the use of offsets. The national carbon inventory only considers GHG emissions and sinks - it does not consider whether or how these interact with the carbon credit scheme. Even if it did, there is no mechanism to transfer emissions from one state to another, so an ACCU from outside of WA cannot count towards WA achieving a net zero goal. Similarly, offsets generated outside of Australia cannot, currently, be transferred to Australia’s inventory, let alone allocated to a specific state. Unless these accounting issues are resolved, any credits permitted to be used as offsets should be required to be generated in WA.

2. Are there any measures which could constrain innovation or adoption of best practice emissions avoidance and reduction?

In the NWS Extension Proposal, the NWS did not disclose options that had been considered to reduce emissions below business as usual levels for pollutants including benzene, oxides of nitrogen and greenhouse gases. This is despite Woodside having a publically available policy saying that it will identify and assess options to reduce emissions.[16]

The EFG’s usual requirement for independent assurance of key documentation, such as best practice reports, is insufficient to ensure that proponents have sincerely applied best practice. In order to strengthen this control, two additional measures are recommended.

This requirement for genuinely independent assessment should also be applied in all instances where a proposal triggers the GHG thresholds stipulated in the EFG. At the moment, the EFG states that this is simply a ‘usual requirement’.

The proponent should be required to sign a declaration stating that they have provided all relevant information to the EPA and decision makers. This should be drafted by the EPA and include the following content, at a minimum:

This type of declaration is a requirement for greenhouse gas audits.

Interaction between federal and state regulation

Where a requirement is placed on a proposal under a federal mechanism, this should be considered as part of the EPA’s assessment, but should not be a reason to avoid recommending conditions.

Where federal conditions are considered to sufficiently meet the EFG’s objective, these should be mirrored in state approvals to mitigate the risk of future federal regulatory changes. For example, a facility could be required to reduce its net emissions on a trajectory that follows the baseline declines under the safeguard mechanism.

Although less significant than the issues above, the following points could also be considered by the EPA: