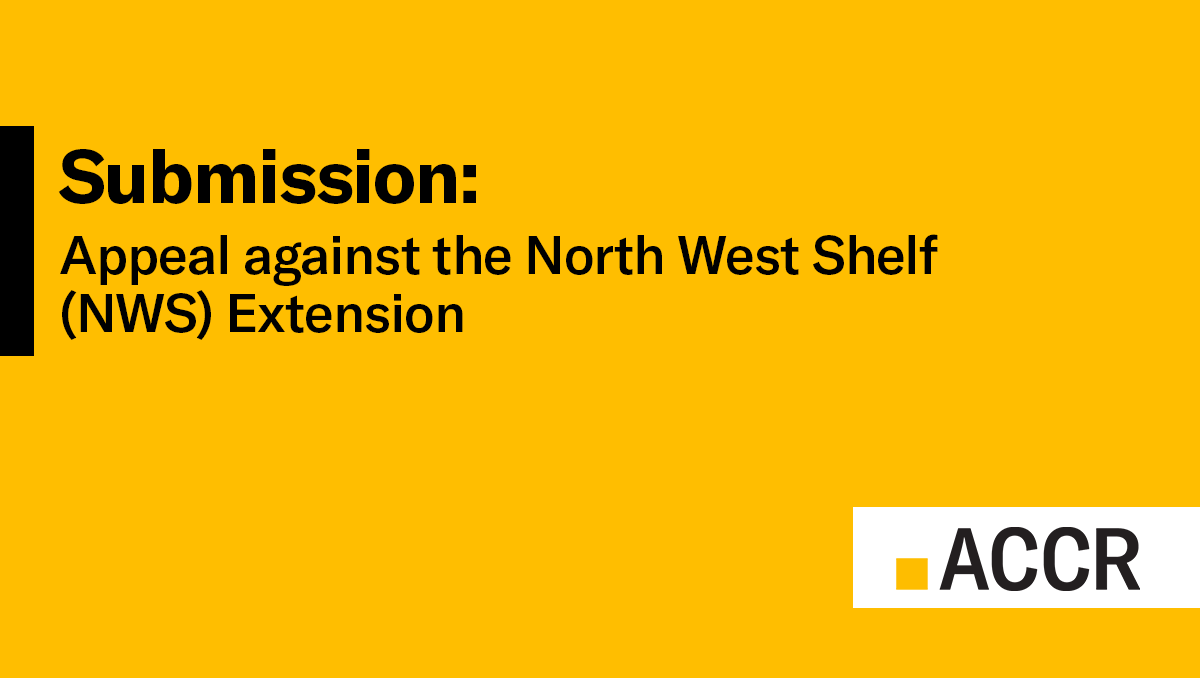 The Australasian Centre for Corporate Responsibility (ACCR) has considered the North West Shelf (NWS) Extension Environmental Review Document (Proposal) and in particular its climate change impacts. ACCR is appealing the WA EPA’s approval recommendation for this Proposal on several key grounds, listed below. Due to the globally material scale of carbon pollution and other environmental impacts of the Proposal, ACCR recommends that the Minister vary the EPA's recommendations to a recommendation that the Proposal not be accepted.

The key grounds for our appeal are underpinned by the unequivocal science of climate change. Climate change is causing damage to the health of Western Australian (WA) residents and environmental receptors. The weight of evidence shows that currently producing fossil fuel projects will breach the goals of the Paris Agreement.[1] As such, there is no room for any additional fossil fuels to be developed, let alone of the scale recommended by the Environmental Protection Authority (EPA) in Report 1727 (EPA Report).

Consideration of this Proposal may be the most significant climate decision currently facing Australia. If approved, the NWS Proposal would permit the Karratha Gas Plant (KGP) to produce 3.2 GtCO2-e of scope 3 greenhouse gases (GHG) in addition to those that are already approved to 2030. To put these emissions into perspective, Australia’s net zero by 2050 target will result in around 3.5 GtCO2-e total domestic emissions being produced after 2030. Therefore from 2030 onwards, the scope 1 and 3 emissions from KGP would be comparable to Australia’s scope 1 emissions.

Scope 3 emissions are an inevitable outcome from operating KGP and should have been contemplated in the EPA Report. Whilst the WA EPA states that it will not impose conditions on scope 3 emissions due to them being “beyond the reasonable control of the proponent”[2], the volume of hydrocarbons processed has a direct relationship to Scope 3 emissions and this is completely within the control of the North West Shelf Joint Venturers (NWSJVs) and the EPA.

The WA EPA’s recommended approval for the NWSJV’s requested LNG processing capacity of 18.5 million tonnes per annum and associated GHG emissions will set up an expectation for future gas project approvals. The current KGP feed gas is in terminal decline and is expected to stop producing in 2036. Processing the declining NWS gas reserves from 2030 will only use 2% of the requested capacity. The need for new gas fields to feed plant capacity in the future is an integral aspect of the NWSJV’s Proposal. These alternative gas sources may include the Browse reservoir and the Canning Basin.

It is also worth noting that these alternative sources of gas supply are not under the control of the NWSJV and may not eventuate. In that case, the generous emission limits that have been recommended by the EPA would not incentivise any action to limit emissions. If KGP does process other sources of gas, it is not clear how much of the Proposal’s capacity will be used. Without knowing how much gas will be processed, it is impossible for an environmental regulator to establish meaningful conditions.

The scope 1 greenhouse gas emissions ‘forecast’ in the Proposal are overstated in a way that could be false or misleading. When subtracting the emissions associated with NWS’ four offshore facilities from NWS’ total emissions reported under the NGER Act, the Proposal’s ‘estimated’ KGP emissions appear to have been overstated by almost by 1 MtCO2-e per annum, or 47 MtCO2-e over the life of the Proposal. This allows the NWSJV to claim emission reductions that do not exist and avoid appropriate regulation.

With regard to GHG abatement options, the EPA’s approach to the use of offsets is scientifically flawed. The suggested equivalence between land based sequestration and the ongoing extraction and use of fossil fuels is false[3] and there is insufficient capacity for the world to meet its climate targets through biological offsets.[4] In addition, its list of Authorised Offsets is incompatible with the Western Australian Greenhouse Gas Emissions Policy for Major Projects (State Policy) and may result in double counting of emissions between state inventories.

KGP is Australia’s oldest LNG facility, and did not have an energy and GHG efficient design even when it was commissioned in 1984. Operating to 2070, as requested in the Proposal, would be unprecedented with equipment being up to 86 years old when finally decommissioned. The EPA Report does not require that any equipment be updated or technologies implemented to reduce emissions.

The Proposal does not show how the NWS has complied with the processes of its Operator, Woodside, including to reduce emission impacts to As Low As Reasonably Practicable (ALARP). Despite the Proposal being a large document, it does not clearly articulate which options to reduce emissions have been considered, what best practice technologies are available, what cost benefit analysis has been conducted and how the cost benefit analysis has been used to determine an ALARP position. If the NWS has withheld this information, it makes it very difficult for the regulator to make an informed recommendation.

Despite the clear shortcomings of the NWS’ Proposal and the EPA Report, the ministers may choose to approve the Proposal on the basis of economic benefits. Industry modelling shows that NWS will provide a decreasing contribution to the government, even if the Browse project is developed.[6] The ministers should note that, historically, NWSJVs have systematically overstated the economic benefits they provide.[7],[8],[9]

Considering these key concerns, ACCR is appealing the WA EPA recommendation to approve the NWS Extension. We encourage the Minister to change the EPA's recommendations to a recommendation that the Proposal be rejected. If the Minister does not do this, the Proposal should be remitted to the EPA for further assessment, so that the EPA can seek additional information from the NWSJVs and robustly reconsider the matters raised in this appeal, including:

Summary of key grounds for appeal

ACCR appeals EPA Report 1727 on the NWS Extension on the following grounds:

The information provided here in support of these grounds is not exhaustive. ACCR intends to provide further submissions regarding its identified grounds of appeal as this appeal progresses.

Recommendations for process and outcomes of appeal

Merits review, as provided for in Part VII of the Environmental Protection Act (1986) (EP Act), requires the appeal decision-maker (the Minister, on advice of the Appeals Convenor (AC)) to consider the decision (the EPA’s report and recommendations) afresh as if they were the original decision-maker (the EPA) and to make the “correct and preferable” decision. This is distinct from a review of whether the EPA acted consistently with its guidance documents or government policy, or judicial review for legal errors.

The purpose of appeals under Part VII of the EP Act, and the minister’s powers in s 101 to dispose of these appeals, is to correct errors or direct a reassessment to ensure the objects of the EP Act and functions and responsibilities of the EPA are achieved. It would undermine the statutory scheme if the use of appeal powers is withheld on the basis that an identified error is not necessarily a legally material error. Therefore, this appeal should not be approached solely from the perspective of whether the EPA was legally able to make the decision (for example, whether the recommendations in the report were one of a number of potential recommendations). Rather, this appeal must be determined on the basis of the best science and policy considerations as made available by parties over the course of this appeal (for example, whether this material supports a better recommendation being substituted).

As this appeal is of significant public interest (for example, the record number of appeals that have been lodged) and there will be a wide range of appellants, ACCR expects there will be a high degree of transparency, flexibility and procedural fairness applied to the appeal process. Consistent with the nature of appeal processes set out in s 109 of the EP Act, this may include receiving various forms of evidence (including informal or anonymous evidence), joint meetings with appellants and the decision-maker, the proactive provision of information relevant to the appeals (including the EPA’s s 106 report), meetings with relevant experts, as well as options for video- or tele-conference meetings and meetings on Country where this is appropriate.

In this regard, we also encourage the AC to convene an appeals panel under s 107C of the EP Act. The panel should include independent experts on carbon budgets, energy markets, carbon offsets, low emissions LNG technology, decommissioning and taxation (noting that the composition of the appeals panel should be a matter for consultation before any appointments). An appeals panel would greatly assist in providing additional capacity and expertise in the complex issues raised in these appeals.

Based on what ACCR considers to be false or misleading statements in the Proposal’s assessment documentation and the globally material scale of environmental impacts, combined with undisclosed forecast impacts and a lack of specific benefits, the minister should change the EPA’s recommendation to a recommendation that the Proposal is rejected.

If the minister does not do this, the Proposal should be remitted to the EPA for further assessment, so that the EPA can seek additional information from the NWSJV and robustly reconsider the matters raised in this appeal, including:

If the minister does not do this, at a minimum, the EPA’s recommended conditions should be amended such that:

Please read the terms and conditions attached to the use of this site.
Australasian Centre for Corporate Responsibility