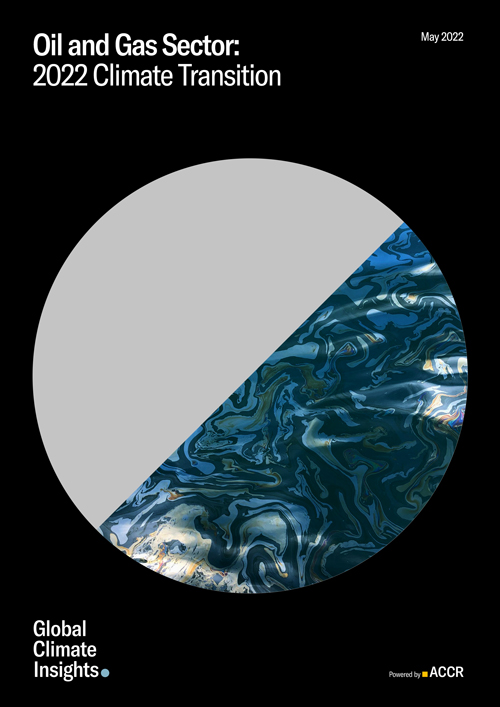 Subscribe to get the latest updates direct from Global Climate Insights

Climate is front and centre in this AGM season

In this note we analyse the climate transition plans of major oil and gas stocks we currently cover (BP and Shell) alongside a diverse set of peers (ExxonMobil, Equinor and TotalEnergies). Heading into the 2022 AGM season, all but ExxonMobil (Exxon) have put forward their climate transition plans for a shareholder vote (Say on Climate - SOC style vote). We assess the success of companies in shifting away from hydrocarbons between FY19-21, and compare their current climate plans.

Who has the best climate transition plan?

Reducing absolute emissions is a step towards preserving long-term shareholder value in an increasingly disruptive transition. All companies we reviewed have an absolute emission target for scope 1 and 2. Only BP addresses scope 3 with a clear target, but divestment is its primary driver of reduction, which will not contribute to global decarbonisation. The chart below shows the reduction in emissions implied by absolute targets between FY19-30. The low percentage of implied emissions reduction (<10%) risks the likelihood of achieving meaningful decarbonisation across a company's portfolio: any increase in the rest (90%) of its scope 3 absolute emissions will likely outweigh the targeted decrease. Exxon remains the clear laggard, even with its new climate-progressive board members.

Has there been progress?

There is no material progress across the sector on linking climate with business strategy: investing surplus cash profits for transition, and remuneration to emissions.

As of today, none of the companies’ performances are Paris-aligned. There is no indication that, outside of the effects of COVID-19, any company has reduced their absolute emissions, which were flat across peers in FY21. Climate transition plans remain too high level and detached from business fundamentals. Companies are adding, but not displacing, hydrocarbon products with renewable alternatives.

Exxon has large gaps in its emissions disclosure, not yet reporting FY21 and incomplete disclosure for scope 3 in FY20

Exxon’s larger scope 1 and 2 is reflective of its higher production of oil and gas (10% higher than next peer in FY20) and higher carbon intensity (26 t CO2e/boed vs its next peer Shell 21 t CO2e/boed, see page 7)

Although Shell reports the highest scope 3 emissions, we believe this is reflective of its methodology, using products sales (including third-party), the largest boundary for scope 3

Exxon shows the least ambition, aiming to reduce scope 1 and 2 emissions by 20%, less than half of Shell, BP and Equinor

Note, Exxon emissions are based on FY20 as FY21 has not yet been disclosed

BP is the only company to have set clear absolute scope 3 targets, although they are predominantly driven by divestment which will not provide real world emissions reduction

We have excluded TotalEnergies’ aspiration from our charts and analysis given there is no quantifiable emissions reduction between FY21 and FY30.

To align with Paris, companies have to transition their products from hydrocarbons to renewable alternatives

Exxon had the highest production of oil and gas between FY19 and FY21, reflective of its market position

Chart: Proportion of oil and gas production to sales FY21

Based on net oil and gas sales disclosed by companies, BP has the highest ratio of sales of own products to third party: for every barrel of BP’s own product sold it sells 1.5 barrels of third party product

In FY21 TotalEnergies has invested the most in transition. The majority of this appears to have been driven by its ~$2.5bn purchase of a stake in Adani Green

In FY21 TotalEnergies invested the largest percentage of its free cash flow in transition at 20%, followed by BP 12% and Shell 6%

Exxon does not disclose FY21 investment in low-carbon

Note, Exxon's emissions are based on FY20 as FY21 has not yet been disclosed

To quantify the gap in current emissions reporting we have calculated the implied emissions from net oil and gas sales for Exxon, TotalEnergies and Equinor, and gross sales for BP and Shell. We use EPA intensities as a standardised factor

Gross volumes are likely to be closer to actual oil and gas sales (including physically traded) than net volumes. Indicating that Exxon, TotalEnergies and Equinor may be underreporting emissions

Chart: Disclosed emissions as a percentage of implied emissions from oil and gas products sold

This analysis shows that when comparing disclosed emissions to implied oil and gas emissions, Shell appears to be disclosing the most at ~99%. TotalEnergies and Equinor are lowest at ~45% to 46%

A closer look at emissions

Comparing carbon intensity to oil and gas produced shows Exxon as the most carbon intensive producer at 26 t CO2e/boed, with Equinor appearing the most efficient

Companies set targets against different base years; for comparability we have re-based targets to FY19. This shows Exxon’s target is even less ambitious than it appears, decreasing from 20% to 12%. BP’s target is highest, but broadly in line with Shell

Rebased scope 3 intensity targets appear most ambitious for Shell (which also covers all third-party products sold). While Equinor is aiming for a 20% reduction this relates only to its own production