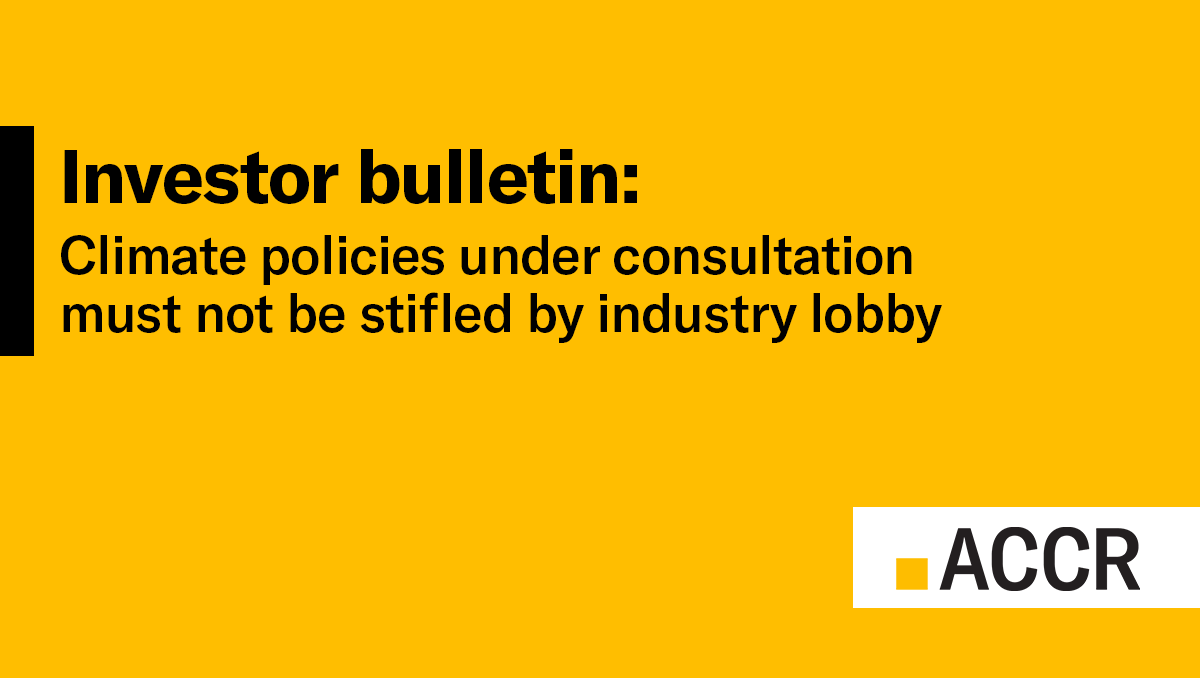 The Australian government's climate bill passed parliament on 8 September 2022, enshrining into law its target to reduce national emissions by 43 per cent by 2030. Whilst the updated target is not aligned with the Paris Agreement’s goals, the country’s ability to meet this and future targets will be dictated by the extent to which effective policy can be implemented. Consultation processes on three critical, enabling climate policies are currently underway in Australia. There is a heightened need during this time for companies to constrain any negative climate lobbying by their industry associations and to advocate in line with the goals of the Paris Agreement. Investors have a critical role to hold companies to account at this important moment.

Having experienced over a decade of climate policy inertia in Australia, we are currently presented with three opportunities to regulate carbon emissions at the national and state level. In addition, there is currently a senate inquiry on the insertion of a climate trigger into Australia's national environmental assessment legislation, the Environment Protection and Biodiversity Conservation Act.

Investors that value stable and predictable policy settings to drive investment decisions and decarbonisation have an important role to play in constraining negative company lobbying at this time, along with enhancing the probability of effective, Paris-aligned policy being implemented in Australia.

The Safeguard Mechanism is the Federal Labor government’s primary policy for decreasing industrial greenhouse emissions in order to achieve its 2030 emission reduction target. The first phase of consultation for this policy commenced in August 2022 and we are already seeing Anglo American and Inpex voicing opposition to critical settings needed to achieve industrial emissions reductions.

There is a genuine risk that this policy will continue to be ineffective if industry influence is not constrained. Key risks relate to big emitters seeking overly generous concessions using a trade exposed argument and that the scheme simply results in the use of land based offsets (Australian and/or International) rather than driving actual reductions in industrial emissions. There have been recent, major concerns surrounding the integrity of ACCUs however it is also important to note that even the highest quality offsets are not equivalent to reductions in fossil fuel emissions. Finally, there are valid concerns around the ability of the scheme to cap emissions growth from new carbon intensive facilities, such as new coal and gas projects.

New South Wales (NSW) is Australia’s most populated state and second most carbon intensive. Recently the NSW EPA released a new climate change policy and action plan to regulate emissions in the state in line with the NSW Government’s objective to reduce emissions by 50% below 2005 levels by 2030. Emissions limits will be designed to complement the Safeguard Mechanism and could involve CO2-e emission intensity limits or annual CO2-e load limits.

The NSW EPA will develop a series of evidence-based emission reduction targets and related pathways for key industry sectors (such as coal mining), which will involve significant consultation with regulated industry in NSW. Companies and their industry associations must use their crucial role in these consultations to act in good faith to explore all opportunities available to decarbonise, innovate and seek to comply with and support sectoral emission reduction limits.

It is likely that many requirements will be complementary to company climate strategies and improvements to emissions monitoring and performance. For example, the EPA will be requiring all new large non-road diesel machinery at NSW coal mines to meet US EPA Tier 4 emission standards (or better) by 2023.

Western Australia (WA) is Australia’s largest gas producing state and is one of two Australian states/territories that have seen emissions increase since 2005. With major projects such as Woodside’s Scarborough project yet to come online, WA has far greater decarbonisation challenges than some Australian regions. As a major LNG exporter, the trajectory of WA’s Scope 1 and Scope 3 emissions have both national and international implications.

The WA EPA has released a consultation draft of a revised Greenhouse Gas Emissions Environmental Factor Guideline (EFG). This EFG will inform how the EPA assesses proposals that emit more than 100 ktCO2-e. The draft EFG makes some improvements relative to the current requirements, such as setting an expectation that ‘best practice’ be applied to the design and operation of facilities, in order to minimise scope 1 emissions. It is anticipated that companies and the WA Chamber of Minerals and Energy will seek to push back on this requirement, along with any ability for the EPA to reference the new policy when considering project expansions or reassessing historic approval conditions.

The EFG is also consulting on the measures proponents can take to reduce Scope 3 emissions. Again, it is anticipated that industry will be very activated by any suggestion that scope 3 emissions are within their sphere of influence.

The way in which industry engages in this policy should be monitored closely, particularly since Woodside, Chevron and Shell have successfully blocked previous attempts by the EPA to impose stricter controls on carbon pollution in WA.

Chamber of Minerals and Energy of WA, Australian Petroleum Production and Exploration Association

What can investors do right now?

This is a crucial time for climate policy development in Australia. There are ready opportunities for investors to enhance the probability of robust policy settings that complement company net zero targets. These include:

The information in this report is for informational and educational purposes only and is not professional advice or recommendations (including financial, legal or other professional advice). It is your responsibility to obtain appropriate advice suitable to your particular circumstances from a qualified professional before acting or omitting to act based on any information obtained on or through the report.

The information contained in this report has been prepared based on material gathered through a detailed industry analysis and other sources and although the findings in this report are based on a qualitative study no warranty of completeness, accuracy or reliability of fact in relation to the statements and representations made by or the information and documentation provided by parties consulted as part of the process.

The sources of the information provided are indicated in the report and ACCR has not sought to independently verify these sources unless it has stated that it has done so. ACCR is not under any obligation in any circumstance to update this report in either oral or written form for events occurring after the report has been issued in its final form. The report is intended to provide an overview of the current state of the relevant industry or practice.