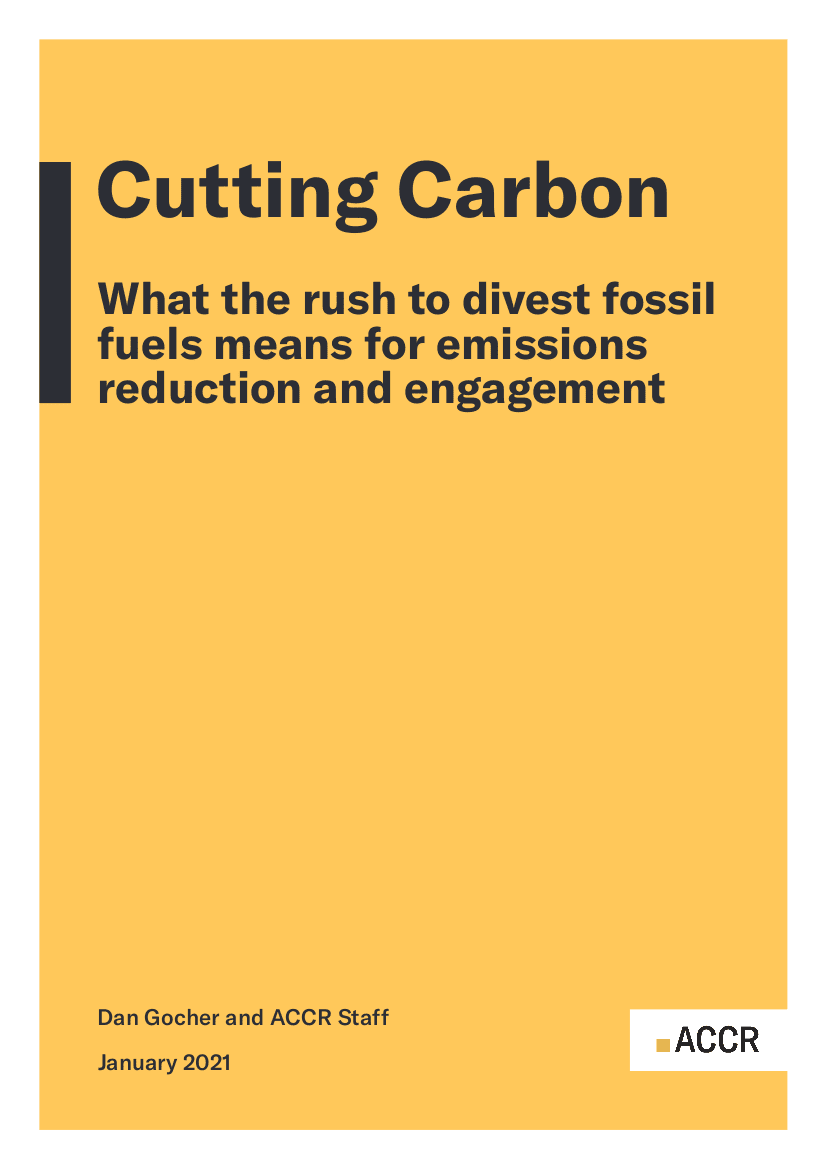 Investor climate networks established with the stated purpose of supporting decarbonisation and energy transition have proliferated in the last decade. Two documents recently released for consultation by collaborative investor initiatives make strong efforts to define the methodology and mechanics of portfolio decarbonisation, and suggest how divestment and reallocation efforts relate to engagement strategies:

These two documents give a sense of emerging shared goals and engagement standards around which the global investment community may coalesce. Interestingly, each of these documents raises, if delicately, the potential pitfalls of a portfolio decarbonisation strategy overly reliant on divestment and reallocation. This discussion is welcome, and will become increasingly important.

The Framework’s recommended approach to developing decarbonisation strategies for listed equities recommends investors assess and categorise each company across a spectrum according to the potential of the business to decarbonise (over an indefinite term).[2] The highest category is “Achieving net-zero”[3] followed by “Aligned to a net-zero pathway”, “Has potential to transition”, and “not aligned or has low potential to transition.”

The Framework emphasises investor engagement with companies, particularly in the “aligned” and “has potential” categories, as the primary strategy to achieve emissions reductions. The Framework advocates for investors to use a range of engagement tools, including: [4]

This is an important contribution to deepening the conversation on engagement tools beyond private meetings and voting on shareholder resolutions.

The Framework concedes that divestment may become a necessary tool in certain circumstances, which it articulates as:[5]

The Framework emphasises a holistic, portfolio-level approach to decarbonisation,[6] with a focus on setting specific targets in relation to emissions intensity reduction, absolute reductions and the allocation of capital to climate solutions.[7] It also proposes that at least 70-90% of emissions from material sectors[8] be either aligned to a net-zero pathway, or the subject of direct or collective engagement.

The Net-Zero Asset Owner Alliance (NZAOA) commits all members to net-zero portfolios by 2050.[9] Members are expected to extend their commitments to all assets under management, except money managed by group-owned asset managers for third party clients. As at the close of 2020, Cbus and QBE Insurance Group are the only two Australian members of the Alliance.[10]

The Draft Protocol proposes that all members reduce the Scope 1 and 2 emissions in their portfolio (excluding sovereign debt, for now) between 16% and 29% by 2025, with a baseline year of 2019.[11] According to the Draft Protocol, NZAOA members should track Scope 3 emissions in their portfolio, but are explicitly discouraged from setting Scope 3 targets “until data becomes more reliable.”[12] Scope 3 intensity targets for priority sectors (oil and gas, utilities, steel, transport) are encouraged, but specific expectations for these sector targets are not quantified.[13]

A potential weakness in the Draft Protocol is its non-committal language on emissions target setting: the NZAOA accepts intensity targets set by members for their corporate debt and equity portfolios, though absolute targets are “preferred.” Reporting both absolute and intensity-based targets is “encouraged,” and the document notes that “if an intensity-based metric is utilised then an explanation should be included.”[14] While some flexibility is appropriate, members and stakeholders would benefit from clearer, more definitive guidance and an approach that promotes standardisation of conduct and reporting.

The Draft Protocol’s acknowledgement of the importance of engagement with companies is welcome. It recommends that all members set engagement targets, using a priority sector-level approach, or the member portfolio’s top 20 (non-aligned) emitters, or those responsible for 65% of emissions in the member’s portfolio. However, the Alliance “does not prescribe a modus operandi for member’s engagement” and only “[seeks] to remain aligned with [the] PRI reporting framework for accounting on engagement activities.”[15] The final version of the Draft Protocol would benefit from a greater level of detail about NZAOA’s expectations of the engagement and escalation activities of its members.

The Draft Protocol’s suggested agenda for engagement with governments is more precise. Its contribution to the public policy agenda highlights the importance of embedding net-zero by 2050 in the economic recovery from the COVID-19 pandemic at a national level, and makes specific recommendations on, inter alia the elimination of fossil fuel subsidies, halting deforestation, and ensuring investment in low-emissions infrastructure.[16] These would be powerful positions for asset owners to support.

5.2 Investor commitments to net-zero in the Australian market

In September 2020, the Australia-based Investor Group on Climate Change (IGCC) published a survey of 38 of its members that concluded that net-zero commitments were becoming normalised, but further action was required to match action with aspirations.[17]

During 2020, several Australian investors made commitments to net-zero emissions in their investment portfolios by 2050, including AustralianSuper, Aware Super, Cbus, HESTA, IFM Investors, Macquarie Asset Management and UniSuper. Local Government Super made this commitment in 2019. In some cases, these longer-term commitments have been accompanied by short- or medium-term commitments to reduce the carbon exposure or emissions intensity of listed equities portfolios. Some investors have explicitly divested from companies involved in thermal coal mining in 2020, including Aware Super, HESTA and UniSuper.

Numerous other investors previously limited their divestment from fossil fuels to a single fund or investment option, which typically represented a relatively minor percentage of assets under management. We will look at four of the latest commitments in detail.

The Transition Plan is ‘three-pronged’, covering low carbon investment, portfolio future-proofing, and engagement.[26] Firstly, the fund has pledged to reduce the emissions of its listed equities portfolio by a minimum of 30 per cent by 2023. In October 2020, the fund passively excluded high emitting companies, enabling it to effectively reduce the carbon footprint of its equity holdings by 40 per cent, and exceed its 2023 target “virtually overnight”.[27] Secondly, Aware Super committed to advocate for a 45 per cent reduction in carbon pollution across the national economy by 2030, and to assess the need to divest from different sectors of the economy and specific companies accordingly. Finally, the fund committed to continuing to work both independently and alongside industry policy and advocacy groups on company engagement to achieve its short-, medium- and long-term emissions targets.

Superannuation fund Cbus was the first Australian asset owner to become a member of the Net-Zero Asset Owner Alliance.[28] In August 2020, Cbus announced its Climate Change Roadmap.[29] This included a target of cutting Scope 1 and 2 emissions of the fund’s entire investment portfolio by 45 per cent by 2030, and achieving net-zero emissions by 2050.

In the Climate Change Roadmap (‘Roadmap’), Cbus proposed to identify the carbon emissions associated with its investments, acknowledging that many assets will be unable to transition to net-zero and will not see out their economic life. The Roadmap set targets and established decarbonisation pathways for each class of assets, on the premise that different sectors of the economy will decarbonise at different rates. The Roadmap seeks to develop a “stranded assets framework” to identify and potentially exclude investments at risk of being unable to transition.[30] These assets would likely include some coal mines and coal-fired power stations. However, unlike HESTA and Aware Super, Cbus has stated that divestment from fossil fuels will not be an explicit part of its strategy to decarbonise. Instead, Cbus has committed to apply pressure to the companies it holds by demanding climate risk reporting in line with the TCFD.

In June 2020, superannuation fund HESTA announced a commitment to reduce the absolute carbon emissions of its investment portfolio by 33 per cent by 2030, and then to net-zero by 2050.[31] This was the first announcement setting both absolute emissions reduction and net-zero targets by a large (>$20 billion) Australian superannuation fund, establishing an important precedent for the sector.

HESTA’s announcement pledged a Climate Change Transition Plan (CCTP) which would be the “most comprehensive of its kind undertaken by a superannuation fund.”[32] HESTA has promised that the CCTP, which has not yet been published, will introduce carbon reduction targets for the portfolio, outline engagement strategies with asset managers, and align the fund’s investment portfolio to the Paris Agreement.

In 2014, HESTA announced that it would make no new investments in thermal coal companies (defined as companies that generate at least 15 per cent of revenue from exploration, production or the transportation of thermal coal).[33] Nevertheless, this policy allowed the fund to retain its existing investments in those companies.

By contrast, HESTA’s new climate policy, announced in June 2020, applies this exclusion strategy to all thermal coal companies, indicating that the fund will completely divest from thermal coal. When the policy was announced, HESTA’s CEO Debby Blakey stated there was no immediate plan to divest from other fossil fuels. Instead, she said, the fund will pressure companies to reduce their emissions gradually to ensure an “orderly transition” to net-zero.[34]

In October 2020, asset manager IFM Investors committed to net-zero emissions by 2050 across all asset classes, aligned with the goals of the Paris Agreement.[35] IFM had previously announced the Australian Infrastructure Carbon Reduction Initiative in August 2019, which focused on reducing material Scope 1 and 2 emissions in seven infrastructure assets, which together accounted for more than 90% of the carbon emissions in the fund’s portfolio.[36] This initiative included short- to mid-term emissions reduction targets.

IFM has established a multi-disciplinary taskforce within its investment team to work on achieving the net-zero target. The fund plans to establish more granular emissions reduction commitments, identify investment opportunities in decarbonisation and climate-resilient assets, and consider the “evolution of technologies and better understand the likely transition pathway”.[37]