The Australasian Centre for Corporate Responsibility​ (ACCR)  is commenting on the results of the 2022 BHP Annual General Meeting, where ACCR’s shareholder resolutions on positive advocacy and climate accounting received 12.73% and 18.67% support respectively.

“ACCR’s shareholder resolutions sought to enhance BHP’s climate policy advocacy, along with the company’s recognition of climate change in its financial statements. Surprisingly the BHP board recommended against both resolutions, undermining its supposed commitment to climate change action and best practice disclosure.

“These results were strong considering BHP’s unjustified resistance to the proposals.

“ACCR’s climate accounting resolution sought a greater recognition from BHP that climate risk is financial risk, by asking the company to present a climate sensitivity analysis, using a 1.5C-aligned scenario analysis, in the notes to its financial statements.

“BHP’s strong opposition to the climate accounting proposal has been quite startling given Origin Energy recently agreed to implement the same proposal and that the resolution text is aligned with the Climate Action 100+ Climate Accounting and Audit indicator. Having received 19% support, we expect BHP to engage more constructively with this issue moving forward.

“BHP is Australia’s largest company and it holds immense political power, which it willingly wields on various policy issues. It should be deploying its influence to enhance the probability of a 1.5 degree  pathway for shareholders.

“ACCR’s positive lobbying resolution is completely aligned with the recent UN High-Level Expert Group recommendations for net zero claims, which called for companies to advocate for ambitious climate policy, in order to create an “ambition loop” that drives the swift transition of our economies.

“Whilst BHP’s climate rhetoric is strong, the company is increasingly being shown up by its peers when it comes to ambition. Investors are noticing this and starting to question whether the culture at BHP is sufficient to genuinely steer the company to align with a net zero world.”

All results for the BHP AGM can be found below. 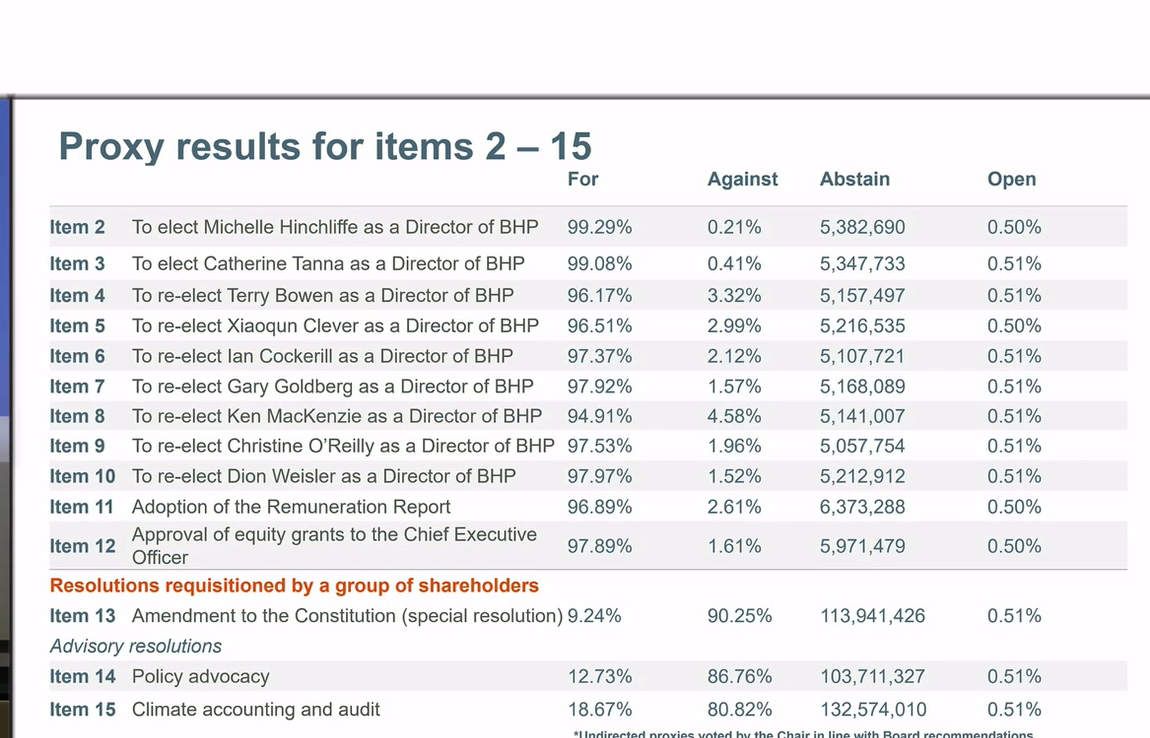