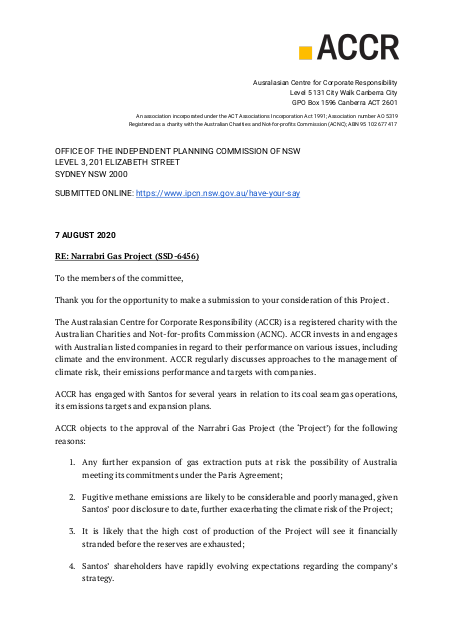 To the members of the committee,

Thank you for the opportunity to make a submission to your consideration of this Project.

The Australasian Centre for Corporate Responsibility (ACCR) is a registered charity with the Australian Charities and Not-for-profits Commission (ACNC). ACCR invests in and engages with Australian listed companies in regard to their performance on various issues, including climate and the environment. ACCR regularly discusses approaches to the management of climate risk, their emissions performance and targets with companies.

ACCR has engaged with Santos for several years in relation to its coal seam gas operations, its emissions targets and expansion plans.

ACCR objects to the approval of the Narrabri Gas Project (the ‘Project’) for the following reasons:

We will discuss each of these issues in detail.

The Project will significantly increase both Santos’ emissions and Australia’s annual emissions, at a time when emissions must decline in order to limit the risk of dangerous climate change.

Prior to the impact of Covid-19, Santos indicated major growth capital expenditure of $500 million in 2020, including the Barossa and Dorado fields, and in Papua New Guinea[8]. Santos continues to fund exploration off the coast of Western Australia, and onshore in the Northern Territory and Queensland[9]. There is a clear gulf between Santos’ plans and the recommendations of the IPCC, given the absence of commercially viable CCS.

Santos has no intention of materially reducing its emissions. According to its 2020 Climate Change Report, Santos has set itself the following targets[10]:

These are not credible targets, nor are they aligned with the Paris Agreement. Santos intends to increase production for the foreseeable future, even though several of its global peers have committed to set targets to reduce Scope 3 emissions (those from the use of products sold), most recently BP plc[11]. Despite asserting that its LNG exports are “reducing emissions in Asia”[12], Santos has provided no evidence for this claim. It is based on the theory that its gas displaces coal for power generation in destination markets, which may only be true in isolated cases. In Japan, for example, gas has previously displaced nuclear power[13] and may have crowded out the uptake of renewable energy, therefore increasing aggregate emissions.

Santos opposes regulators taking into account the emissions from Australia’s LNG exports. In a speech in July 2019, CEO Kevin Gallagher said “...that doesn’t mean there’s a role for regulators to consider Scope 3 emissions in project approvals”[14].

Santos’ commitment to reduce operational emissions by 5% by 2025 will likely be achieved by the ongoing decarbonisation of the electricity grid, with only minor operational improvements directly implemented by the company. Ironically, in the Cooper Basin, Santos is using solar power to extract oil and gas more cheaply[15].

Santos has failed to provide additional information about its commitment to “assess carbon capture and storage, and solar thermal technologies”. It has not disclosed its financial commitment, or any sort of timeline or metrics by which it will measure success.

The IPCC 1.5°C report recommends that in order to reach net zero carbon emissions by 2050, gas must play a diminishing role in primary energy supply. Failing to limit global warming to 1.5°C will seriously impact weather systems, the economy and society more broadly. The Australian summer of 2019/20 is evidence that climate change is already impacting the economy, yet Santos has no plans to materially reduce its carbon footprint.

Oil and gas extraction is one of the largest sources of methane emissions globally, accounting for approximately 20-25% of all methane emissions per year[20]. Methane (CH4) is the primary component of natural gas, and can be directly released to the atmosphere at each stage of gas production and transport. This happens deliberately (via flaring, venting, equipment purging, or incomplete combustion) or accidentally (via leaks or failures)[21]. Methane is more potent and has a higher potential to exacerbate the effects of climate change than carbon dioxide (CO2). Over a 20 year period, the global warming potential of methane is 85 times greater than carbon dioxide, and 28 times greater over a hundred years[22].

Santos claims that “lifecycle emissions for energy produced from the combustion of the natural gas delivered by the Project will be nearly 50% less than for electricity that is currently supplied to the NSW grid”[24]. Due to the global warming potential of methane, excessive fugitive emissions undermine the efficiency of gas in relation to coal as fuel for electricity. According to the Melbourne Energy Institute, “the methane-emission threshold at which point using gas for electricity generation provides no benefits over using coal occurs at a methane-emissions level equal to 3.2% of total gas production”[25]. This threshold is further lowered in the case of exported LNG, due to the energy consumed throughout the export and import process.

A 2014 CSIRO pilot study into fugitive emissions from equipment and well casings measured emissions at just 43 CSG wells – less than 1% of the existing CSG wells in Australia at the time[27]. While that study estimated that fugitive emissions accounted for 0.34% of gas produced, it also concluded that “to fully characterise emissions, a larger sample size would be required and measurements would need to be made over an extended period to determine temporal variation”[28]. Furthermore, that “there are many other potential emissions points throughout the gas production and distribution chain that were not examined in this study”[29]. In its lifecycle greenhouse gas emissions of a CSG to LNG project in Queensland, GISERA estimated fugitive methane emissions at 1.5% of gas produced[30]. Such high fugitive methane emissions would leave little room for error, relying on Santos to ensure that its fugitive methane emission management practices are best in class.

Given Santos’ poor disclosure, it is difficult to determine the quality of its fugitive methane emission management practices. In 2017, the oil and gas industry developed a set of guiding principles on reducing methane emissions across the gas value chain[31], whose signatories include Woodside, Royal Dutch Shell and Santos’ partner at Gladstone LNG, Total. The guiding principles require signatories to:

Santos discloses an absolute methane emissions figure (see below), but it does not disclose how these figures are determined, whether they are estimates or measurements, or a combination thereof. Santos claims that fugitive methane emissions “comprise less than 1%” of its operated emissions[32]. Santos does not produce this number alongside its production numbers, or as a time series. Santos does discuss its leak detection and repair (LDAR) practices, but only insofar that it complies with Queensland’s Petroleum and Gas (Production and Safety) Regulation 2004; the Queensland Government’s Code of Practice for Leak Management, Detection and Reporting for Petroleum Facilities; and, its NSW Environment Protection Licence (EPL) requirements[33]. Santos states that “regulations and codes require operators to take all reasonable and necessary steps to avoid leakage from gas processing infrastructure and apply a risk-based approach to inspection frequencies with minimum timeframes and triggers”[34]. Santos does not disclose any detailed information about inspection frequencies, minimum timeframes and triggers, or the type and proportion of its infrastructure that is subject to inspection.

As part of the Project, Santos has committed to implement and a leak detection and repair program approved by the NSW Environmental Protection Authority to identify and minimise fugitive emissions[35]. But Santos’ poor reporting to date makes it difficult to assess Santos’ efficiency and performance, particularly that of its unconventional gas operations.

According to its 2020 Climate Change Report, Santos has “engaged CSIRO to undertake initial field monitoring across its operated onshore assets, including measuring background levels of methane, investigating fluxes and identifying sources of elevated methane levels”[36]. While this is welcome, this program of work appears to apply to the McArthur Basin, Arcadia and Amadeus Basins[37], and not the Narrabri field.

According to Pegasus Economics, the Project is relatively costly, with an estimated production cost of $7.40GJ, ranking it 41 out of 51 actual and undeveloped gas projects assessed by the Australian Energy Market Operator (AEMO)[38]. As the economy transitions away from fossil fuels, the likelihood of higher cost resources becoming financially stranded will increase.

While the likelihood of stranded oil and gas assets may seem far-fetched, just this week, French company Total announced a $US5.1 billion impairment on its high-cost Canadian tar sands assets, declaring them “stranded”[41]. As the energy transition accelerates, other oil and gas projects will be similarly stranded.

In April this year, ACCR filed two shareholder resolutions which were voted on at Santos’ AGM (see Appendix). The first resolution requested the company set short, medium and long term emissions targets aligned with the goals of the Paris Agreement, which was supported by 43.39% of Santos shareholders. The second resolution requested the company conduct and publish a review of its direct and indirect lobbying in relation to climate and energy policy, which was supported by 46.35% of Santos shareholders.

It is clear from these results that a large proportion of Santos’ shareholders are dissatisfied with Santos’ approach to managing climate risk, particularly its existing emissions targets, and its lobbying of politicians at both state and federal levels.

As investors’ understanding of climate risk evolves, the expectations of oil and gas companies will evolve, too. ACCR’s shareholder resolution on Paris Goals and Targets, supported by 43.39% of Santos’ shareholders, explicitly requests the company set targets that include Scope 1, 2 and 3 emissions. This is a step change, as investors become increasingly convinced of the need for fossil fuel companies to be held responsible for the emissions from the use of the resources they extract. Ultimately, by setting Scope 3 emissions targets, oil and gas companies must at first limit, and then begin to reduce, production.

Just this week, BP became the first oil and gas major to commit to such targets, announcing that it would cut production by 40% by 2030[42]. As noted above, Santos’ CEO Kevin Gallagher does not support Scope 3 targets[43], as the company continues to rely on the implicit claim that all of the gas Santos produces displaces coal in electricity generation. Over time, investors will continue to intensify their engagement with Santos with a clear expectation that it sets emissions targets across its entire value chain. This further increases the likelihood that the Project could be stranded.

ACCR’s second shareholder resolution, supported by 46.35% of Santos’ shareholders, sought a review of the company’s direct and indirect lobbying. While this may seem unrelated to the Project, it is worth noting that since 1 July 2014, representatives from Santos and the Australian Petroleum Production and Exploration Association (APPEA) have met with NSW ministers on 30 occasions[44]. Such political interference is precisely the sort of behaviour that a significant number of Santos’ shareholders are keen to prohibit.

ACCR believes the Project poses a risk to Australia’s ability to meet its commitments under the Paris Agreement, which is sufficient reason for the Project to be rejected. ACCR is also aware of the risks the Project poses to biodiversity in the Pilliga forest, to groundwater used by local farming communities, and to the ability of those communities to acquire sufficient business and property insurance. We endorse the views of community members and groups that are concerned by these issues, providing further reason to reject the Project.

Director of Climate and Environment