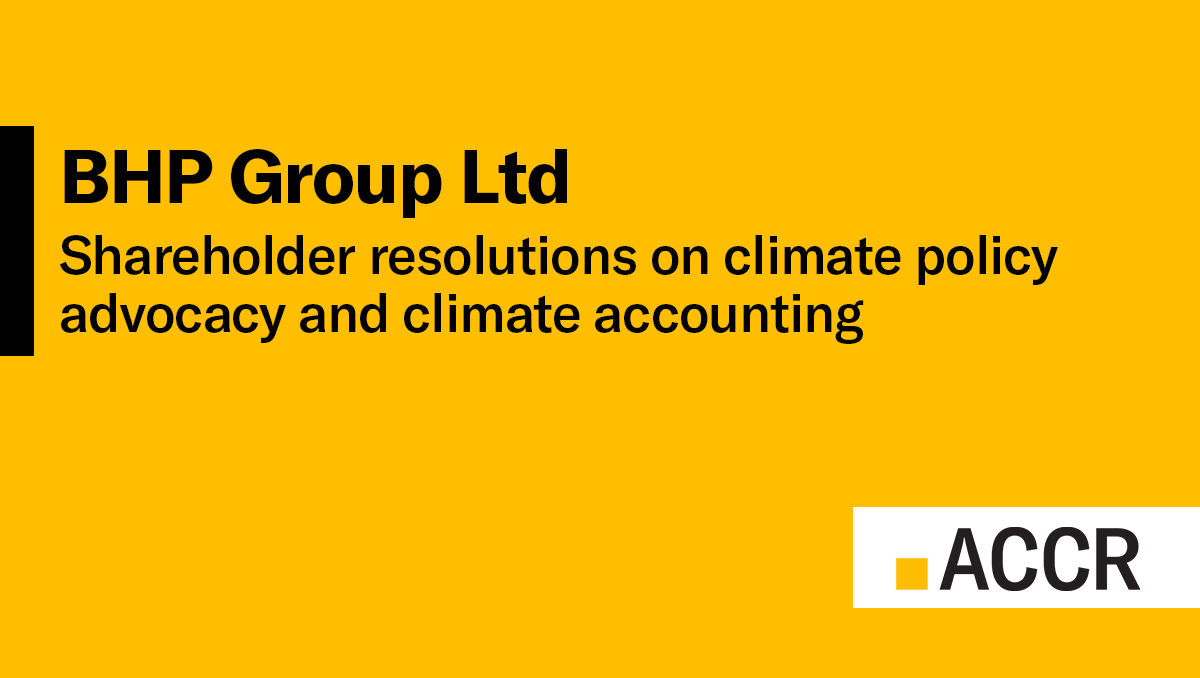 ACCR has engaged regularly with BHP on its decarbonisation commitments and climate lobbying footprint for several years. This year, ACCR has filed two shareholder resolutions for consideration at BHP’s November 10 AGM, seeking advocacy for policy that is aligned with limiting warming to 1.5°C and a climate sensitivity analysis in the company’s financial statements.

1. Ordinary resolution on company consistency with limiting warming to 1.5°C

Shareholders request that our company proactively advocate for Australian policy settings that are consistent with the Paris Agreement's objective of limiting global warming to 1.5C.

Nothing in this resolution should be read as limiting the Board's discretion to take decisions in the best interests of our company.

BHP is Australia’s largest company and it holds immense political power, which it willingly wields on various policy issues. Since 2020 the company has stated that a 1.5°C pathway is the best outcome for shareholder value (see figure below).[1] BHP should be deploying its influence to enhance the probability of that outcome for shareholders. 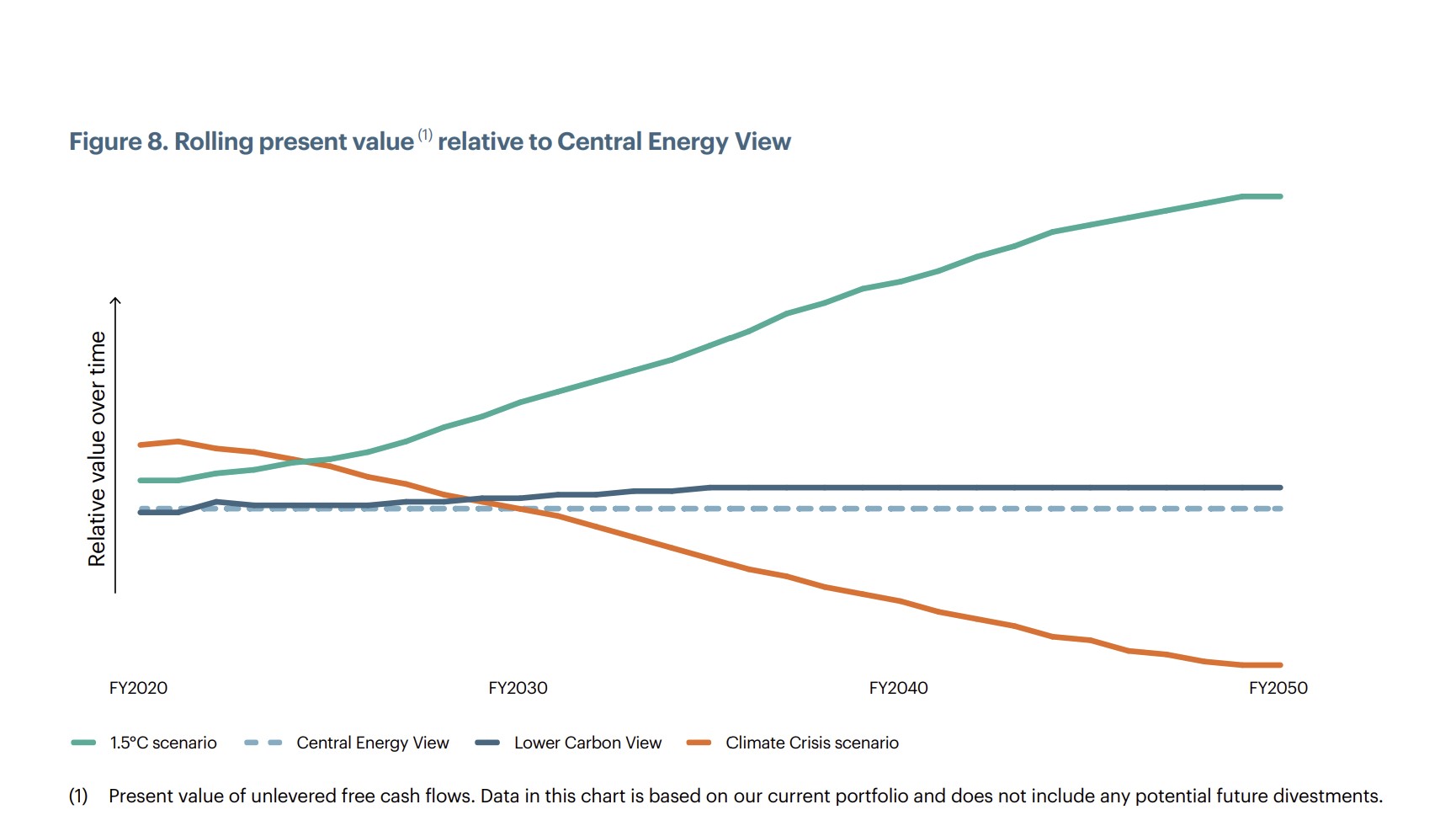 This is a critical moment in Australia following a change in federal government. It is essential that the winners from rapid decarbonisation in Australia, such as the major diversified miners, step up to counter the power of the fossil fuel lobby in this country.

Miners of future-facing metals must counter the fossil fuel lobby

The 2022 IPCC Working Group III report on Mitigation of Climate Change identified that a major threat to limiting warming to 1.5°C is the “power of incumbent fossil fuel interests to block initiatives towards decarbonisation”.[2] The coal lobby, including BHP’s industry associations such as the Minerals Council of Australia (MCA) and the NSW Minerals Council, continue to play a damaging role in Australia.[3] Recent submissions to the Federal Government safeguard mechanism demonstrate that the MCA[4] and the oil and gas industry[5] are actively seeking to undermine the effectiveness of evolving climate policy.

Unsurprisingly, campaigns that are oppositional to rapid decarbonisation are wielded by industries that have the most to lose as the world transitions away from fossil fuels. The share of BHP’s revenue that is driven by fossil fuels has declined as a result of the BHP Petroleum spinoff. Diversified mining companies and their shareholders have a significant amount to gain from ambitious climate policy.[6]

BHP is clearly willing to wield its political influence in the interests of its business. In 2010, it helped to bring down Australian prime minister Kevin Rudd due to his proposed super profits tax for the mining industry.[7] In 2017, BHP lobbied against a proposed mining tax in Western Australia that saw a party leader lose his seat.[8] In 2022, it has thrown its weight behind an emerging campaign against the Queensland government’s coal royalty rate rise.[9]

Whilst such aggressive lobbying against taxation is not condoned, shareholders should question why BHP is not applying a similar assertive approach to advocacy for the policy settings required to limit warming to 1.5°C. On numerous occasions, such as when BHP and its industry associations were successful in campaigning for the repeal of Australia’s carbon pricing mechanism,[10] it has used its influence to undercut climate action.

Whilst there are some early signs that BHP may start to advocate for the opportunities and new sources of national prosperity from decarbonisation,[11] the messages are mixed. CEO Mike Henry advised the recent Federal Government Jobs Summit[12] “Australia should harness the transition to its full advantage, but let’s make sure it’s grounded in reality… We don’t have the same natural advantages in renewable energy, or frankly in copper, nickel or lithium and so on.” This comment is perplexing considering Australia’s abundant sun and wind resources, along with having the highest nickel reserves globally[13] and second highest copper and lithium reserves.[14]

The company’s Safeguard Mechanism submission[15] was also variable. Whilst it advocated in favour of removing overly generous baselines (i.e. headroom), it advocated for the use of international offsets, even though it claims to support the mitigation hierarchy. It also warned against imposing best practice emissions performance requirements on new facilities, stating that “most new investment in the next 5-10 years will be determined by technical and financial studies carried out in the previous 5-10 years”. This comment does not reflect the culture of innovation and agility required to align BHP to a 1.5C pathway, nor the urgency of the climate challenge.

A range of positive policy opportunities exist for BHP

As a major winner from rapid decarbonisation, BHP should consistently and positively advocate in line with the 1.5°C goal. Specific advocacy opportunities include:

BHP’s response to the resolution

The BHP board has recommended[18] that shareholders vote against this resolution. ACCR has commented on the majority of its reasons below, overall finding them to be inconsistent and insufficient to justify a vote against.

Shareholders request that from the 2023 financial year, the notes to BHP’s audited financial statements include a climate sensitivity analysis that:

Nothing in this resolution should be read as limiting the Board’s discretion to take decisions in the best interests of our company.

BHP aims to ensure its ‘capital expenditure plans are not misaligned with the Paris Agreement’s aim to pursue efforts to limit global warming to 1.5°C’.[19] It also 'regularly test(s) [its] portfolio against a range of climate change scenarios'.[20] BHP is 'committed to lead the evolution of our industry'.[21] However, BHP is not sufficiently transparent about how it considers climate change in its audited financial statements. This “reduces an investor’s ability to make investment, engagement and voting decisions”.[22]
This resolution warrants shareholder support, given:

What exactly does this resolution require?

This resolution seeks the following in the notes to BHP’s financial statements:

BHP is already meeting much of the request, but assumptions need to be more clearly disclosed

In 2022 BHP appears to have done much of the work to earn a higher score. BHP’s 2022 financial statements qualitatively discussed the financial impacts of climate change, including a 1.5°C scenario.

BHP’s chosen 1.5°C scenario assumed that, “the long-term commodity price outlooks under this scenario for iron ore, copper, metallurgical coal, nickel and potash are either largely consistent with or favourable to the price outlooks in the Group’s current operational planning cases”. As such, “a material adverse change is not expected to the valuation”.[24]

Importantly, the AASB / AUASB Joint Practice statement says that where no financial impacts are expected to the amounts recognised, there is still an expectation for issuers to ‘explain assumptions made’.[25]

Although BHP provides commentary on the demand for each of these commodities, that is only an input into the asset value calculations, insofar as it informs commodity prices. Disclosing price assumptions would provide investors with more transparency.

With steel responsible for 8% of global emissions[28] and increasing investments in green steel manufacturing,[29] the conclusion of robust metallurgical coal demand in a 1.5°C scenario may no longer be reasonable. The International Energy Agency’s Net Zero Emissions Scenario for example, states that “demand for coking coal falls at a slightly slower rate than for steam coal, but existing sources of production are sufficient to cover demand through to 2050”.[30] This suggests BHP’s metallurgical coal assets may be impaired in a 1.5°C pathway.

ACCR’s resolution is however not asking for these assumptions to be changed, rather for more specific disclosure. Disclosure of pricing assumptions will allow investors to make more informed investment and engagement decisions.

ASX-listed company recognition of climate in financial statements is improving

ACCR filed a similar resolution with Origin Energy (ASX:ORG). In its Notice of Meeting, Origin stated that, ‘We support including a climate sensitivity analysis using a 1.5°C scenario in our financial statements and commit to doing so from FY2023.’ This sensitivity analysis would present ‘the quantitative estimates and judgements’.[31] As such, Origin’s equivalent resolution has been withdrawn.

In its FY22 financial statements South32 materially improved its recognition of climate change. It now explicitly considers a 1.5°C scenario when assessing for impairments[32] and where impairments are made, the relevant commodity prices are disclosed.

Response to BHP’s Notice of Meeting

BHP’s notice of meeting for the 2022 AGM provides reasons for why the board does not not support ACCR’s resolution.[33] In ACCR’s view these responses are inconsistent with the company’s disclosures to date and willfully misrepresent the request.

BHP accepts it “is exposed to a range of transition risks that could affect the execution of our strategy or our operational efficiency, asset values and growth options, resulting in a material adverse impact on its financial performance, share price or reputation, including litigation. The complex and pervasive nature of climate change means transition risks are interconnected with and may amplify our other risk factors”.[39] Changing weather patterns and more extreme weather events, driven by climate change, also directly confront BHP's business operations.

Whilst the energy transition presents significant upside for a number of BHP’s commodities, transition risks have been realised for the New South Wales Energy Coal Cash Generating Unit (CGU), as seen in the restated 2021 financial statement, when it was impaired by $1,057 million due to “changes in energy coal prices”.[40]

Resolution is consistent with investor expectations

Subsequently, the Institutional Investors Group on Climate Change (IIGCC) outlined its 'unequivocal' expectation that companies and auditors will deliver 'Paris-aligned accounts', defined as "accounts that properly reflect the impact of getting to net zero emissions by 2050 for assets, liabilities, profit and losses".[42] IIGCC expects directors to: affirm that the Paris Agreement goals were considered in preparing the accounts; explain, in the Notes, how critical accounting judgements are consistent with NZE by 2050 (or if these assumptions are not used, why not); present results of sensitivity analysis around Paris-aligned assumptions; state any implications for dividend paying capacity of Paris-alignment. IIGCC also expects companies to account for any inconsistency between its narrative reporting on climate risks and the assumptions made in accounting.

CA100+'s Net Zero Benchmark assesses whether company accounting disclosures and practices adequately reflect climate change risk, and the global movement towards NZE GHG emissions by 2050 or sooner. The CA100+ initiative —representing more than 700 global investors managing AUM $68 trillion— expects that 'net zero aligned' companies and auditors will provide investors with oversight of how accelerating decarbonisation, in line with the 2050 trajectory, will affect a company's financial position and profitability.[43]

Some investors are already expressing their expectations around reflection of climate in company financial statements and audits in their voting decisions.[44]

Resolution is consistent with accounting standards and guidance

The Australian Accounting Standards Board (AASB) Practice Statement 2, Making Materiality Judgements, is clear that 'information is material if omitting it or misstating it could influence decisions that users make on the basis of financial information about a specific reporting entity'.[45] Therefore, and as the AASB/AUASB noted in 2019, investor statements on the importance of climate-related risks to their decision-making will often render these risks 'material' to a company, requiring them to be reflected in financial statements.[46]

BHP considers climate change to be “a material governance issue and a strategic issue”.[47]

In 2020, the International Financial Reporting Standards (IFRS) board issued an implementation document explaining how elements of 12 separate IFRS standards may introduce requirements to make climate disclosures in financial statements.[48]

Finally, if Australia develops sustainability-related reporting requirements that are aligned with the ISSB [Draft] IFRS S2 Climate-related Disclosure standard,[49] the AASB has stated these will ‘supplement and complement’ information provided in financial statements.[50] Consequently this shareholder resolution is a complementary extension of the anticipated sustainability standards.