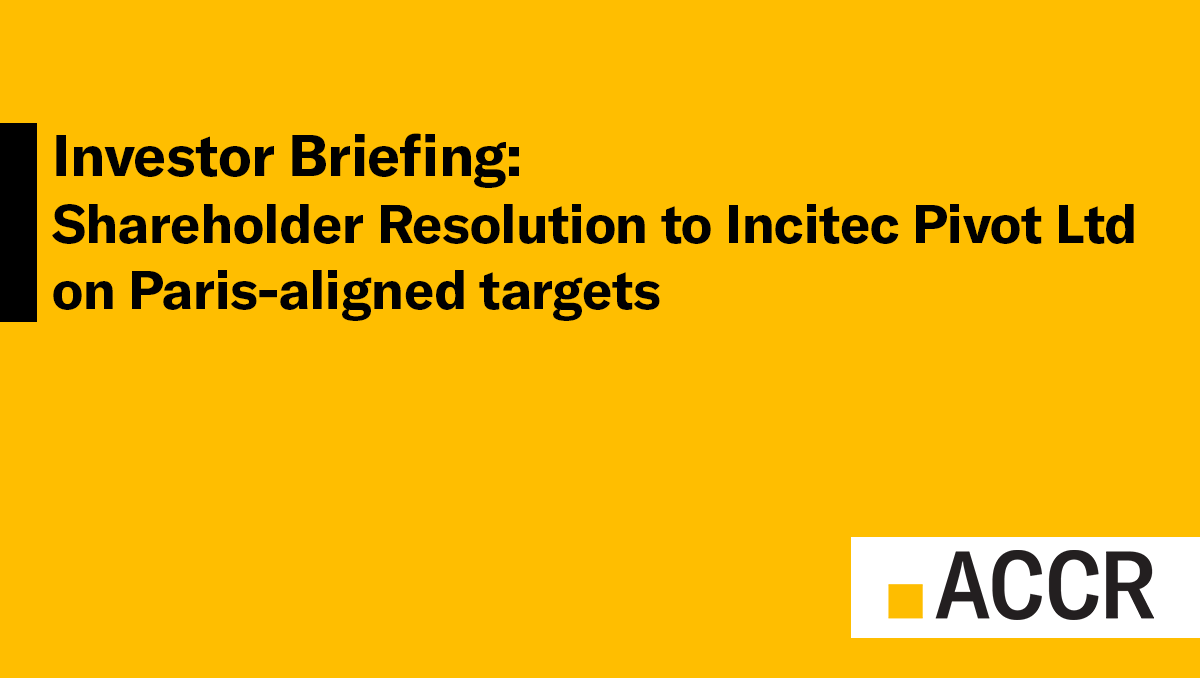 ACCR has engaged with Incitec Pivot (IPL) on its decarbonisation commitments and lobbying related to climate and energy policy for several years.

This is the first ever shareholder resolution filed with IPL.

Shareholders request the Board disclose, in annual reporting from 2022:

Nothing in this resolution should be read as limiting the Board’s discretion to take decisions in the best interests of our company, or to limit the disclosure of commercial-in-confidence information.

ACCR welcomes IPL’s first climate change report and its commitment to achieving net zero operational emissions as soon as practicable, and before 2050 if possible.[2] ACCR acknowledges that IPL operates in a sector with emissions that are widely considered hard-to-abate.

ACCR believes there are a number of reasons to support this proposal:

IPL has also committed to giving shareholders a non-binding vote on its climate plan in 2022 (‘Say on Climate’).[5] Supporting this resolution is complementary to the 2022 vote, as it provides shareholders with an opportunity to set expectations in advance.

IPL’s operational greenhouse gas (GHG) emissions have increased 26% since 2015,[6] while the emissions intensity of its ammonia production improved by 8% over the same period.[7] This improvement is largely due to energy efficiency projects and the more efficient ammonia plant in Waggaman, Louisiana, which came online in 2016.

IPL’s operational emissions were down 13.9% between 2020 and 2021, due to lower production. While IPL doesn’t publish production numbers, energy use (which is the most appropriate proxy for production) was down 13.6% over the same period, which was consistent with the decline in emissions. This decline was largely driven by unplanned outages at Waggaman in April-May[8] and August, due to Hurricane Ida.[9]
Subject to plant performance, ACCR expects IPL’s emissions to recover to 2020 levels in 2022.

IPL reported its value chain emissions (Scope 3) for the first time in 2020, inclusive of material upstream and downstream emissions.[10] IPL’s Scope 3 emissions have declined 18.6% between 2018 and 2021.[11] However, it is likely that its Scope 3 emissions were significantly higher in 2021 than 2015 due to increased production (Waggaman started production in 2016).

IPL previously reported the share of energy it sources from fossil fuels (excluding natural gas and diesel used as feedstock) was 95% in 2020, which was unchanged since 2015.[12]

The 2025 and 2030 targets are not aligned with the goal of the Paris Agreement to limit warming to 1.5°C. While the Science Based Target initiative (SBTi) has not published a sectoral decarbonisation approach for the chemicals sector, an absolute contraction approach consistent with limiting global warming to 1.5°C, which is “strongly encouraged”[14] for companies operating in developed countries, would require IPL to:[15]

IPL has not set targets or goals to reduce its Scope 3 emissions, but it has “investigated opportunities” to do so (see below).

It is worth noting that by setting operational rather than equity share Scope 1 and 2 targets, IPL is excluding emissions from non-operated joint ventures such as Queensland Nitrates, which are treated as Scope 3 and therefore not covered by any emissions reduction target.

IPL is investigating CCUS at its Waggaman ammonia plant in Louisiana, USA.[18] Elected officials in Louisiana are very supportive of CCUS, introducing the SCALE Act in March 2021, with the intention of making Louisiana “a significant national hub” for CCUS.[19]

There are, however, significant concerns with this technology. IPL itself acknowledges that its deployment of CCUS is subject to “economic feasibility”.[20] If captured CO2 is sold for EOR, then IPL emissions merely shift from its operational footprint to its value chain, by facilitating fossil fuel production.

IPL intends to install abatement catalysts for N2O emissions (with 100 year global warming potential of 265[21]) at its Moranbah, Queensland and Louisiana, Missouri ammonium nitrate manufacturing plants.[22] IPL has not disclosed why its other operating ammonium nitrate plants (Cheyenne and St Helens) are not suitable for this technology. IPL has also not disclosed the cost or timing of upgrading Moranbah and Louisiana, noting that Moranbah is next due for a turnaround (scheduled outage) in FY25.[23]

On 8 November 2021, IPL announced that it would close its Gibson Island plant at the end of December 2022, due to its inability to secure an affordable long-term gas supply contract.[25] While IPL does not report facility-level emissions data, under Australia’s safeguard mechanism, Gibson Island’s emissions baseline is 503 kt CO2e.[26] In 2019-20, Gibson Island reported emissions of 374 kt CO2e, or approximately 9.4% of IPL’s 2020 emissions. It is unclear whether the closure of Gibson Island will be included in the 2025 and 2030 emissions reduction targets, or be additional to those targets.

IPL has recently announced partnerships with Fortescue Future Industries, and Keppel Infrastructure and Temasek to investigate green ammonia production,[27] but it is yet to disclose sufficient detail on these plans to assess their merits.

Fertiliser use represents 49% of IPL’s Scope 3 emissions. IPL states that its Enhanced Efficiency Fertiliser range may reduce GHG emissions by up to 73%.[28] While IPL is working with regulatory bodies to generate carbon credits from the use of these products, it should also consider supplying these products as the standard rather than as a specialty range.

Purchased goods represent 23% of IPL’s Scope 3 emissions. IPL should be working with its suppliers to reduce their emissions, and commit to shifting to suppliers with Paris-aligned emissions reduction targets.

The majority of IPL’s capital expenditure is allocated to sustenance. In 2021, just A$51.2 million (14%) was allocated to minor growth capital including “plant efficiency projects and other projects supporting volume growth and technology investments”.[29]

IPL has not disclosed how much capital it intends to allocate to decarbonisation initiatives beyond energy efficiency.

In 2020, IPL participated in a A$2.7 million solar hydrogen feasibility study into renewable ammonia production at Moranbah, Queensland,[30] supported by A$980,000 in funding from the Australian Renewable Energy Agency (ARENA).[31] IPL intends to use the findings from this study to develop “potential pathways to net zero operational emissions by 2050”.[32]

IPL has a 50% stake in the Range (coal seam) Gas project in the Surat Basin, Queensland. The project contains an estimated 270 petajoules (PJ) of 2C Contingent gas resource (IPL share: 135 PJ).[33] Three pilot wells were drilled and commissioned in 2021, and the project is expected to deliver first gas to market in 2024.[34] This is despite the International Energy Agency’s recently published ‘Net zero by 2050’ report concluding that no new coal, gas or oil developments could proceed beyond this year, in order to limit global warming to 1.5°C.[35]

In FY22, 10% of the senior executives’ STI scorecard will be determined by ESG-related strategic objectives.[36] It is unclear whether that 10% will be determined by emissions reductions and/or associated initiatives alone, or a broad range of ESG activities.
The 2021-24 long-term incentive will also include a 10% ESG component intended to drive “IPL achieving its 2025 and 2030 targets on climate change and focus on investing in new technologies” to enable long-term emissions reductions.[37]

These updates to the remuneration structure are welcome, but further transparency on emissions-related incentives would be useful for shareholders.

In late 2020, IPL was added to Climate Action 100+ initiative (CA100+), a global coalition of institutional investors engaging with carbon-intensive companies.[38] ACCR expects that IPL will be assessed in the CA100+ Net zero company benchmark in early 2022, which expects companies to set short-, medium- and long-term emissions reduction targets aligned with the Paris Agreement. Companies are also expected to align capital expenditure and remuneration with those targets.

ACCR believes there is sufficient reason to vote for this proposal, and that support would be complementary to the forthcoming ‘Say on Climate’ vote in 2022.