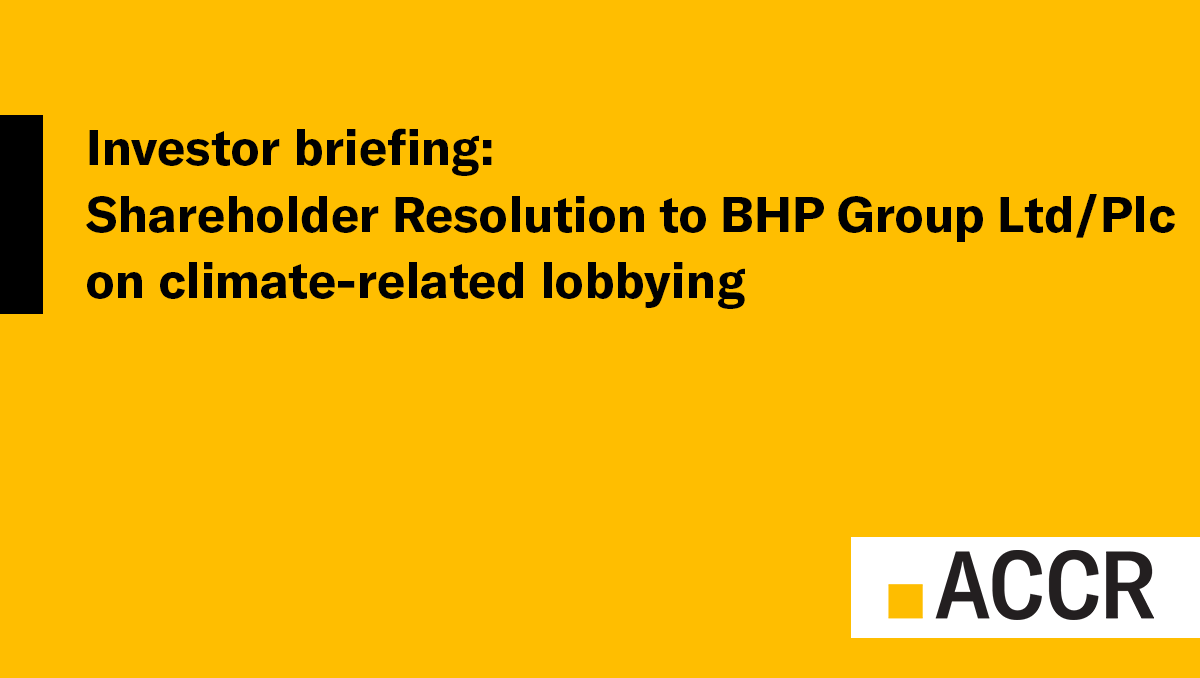 ACCR has engaged regularly with BHP Group on its decarbonisation commitments and lobbying related to climate and energy policy for more than four years.

Despite cosmetic improvements to policies, there is little evidence of BHP’s industry associations advocating for ambitious and effective climate and energy policy.

Shareholders request that our company strengthen its review of industry associations to ensure that it identifies areas of inconsistency with the Paris Agreement.

Where an industry association’s record of advocacy is, on balance, inconsistent with the Paris Agreement’s goals, shareholders recommend that our company suspend membership, for a period deemed suitable by the Board.

Nothing in this resolution should be read as limiting the Board’s discretion to take decisions in the best interests of our company.

BHP’s own analysis concludes that limiting warming to 1.5°C would be an “attractive scenario for BHP, for our shareholders and the global community.”[1] In other words, BHP has determined that highly ambitious climate action is best for its business and its investors.

This resolution seeks to ensure that the advocacy of BHP’s industry associations is consistent with these investor expectations, along with the company’s stated goal to limit warming to 1.5°C.

It is a reasonable expectation that BHP assess its industry associations for consistency with a 1.5°C scenario which it concluded is in the best interests of shareholders, and to suspend membership where that is not the case.

The suspension of membership is a credible response to a lack of progress from industry associations. In October 2020, BHP suspended its membership of the Queensland Resources Council,[3] following its anti-Greens Party advertising campaign during the Queensland state election.

There is a clear rationale for shareholders to support this resolution, as per the following reasons:

In February 2021, Bloomberg ranked Australia’s climate policies as the weakest of the largest developed economies.[5] In June 2021, Australia received the lowest score awarded to any of the 193 UN member states for climate action.[6] Australia’s commitment to reduce emissions by 26-28% by 2030 (from 2005 levels) has been deemed inadequate by a range of experts.[7] Australian government forecasts suggest that emissions will decline by just 22% by 2030.[8]

Despite improved transparency of our company’s governance of industry associations, UK think tank InfluenceMap rates our company’s climate policy footprint ‘D’[9] (scale A-F), and in 2020 ranked BHP the second most oppositional company on climate and energy policy in Australia.[10]

On balance, the impact of BHP’s industry associations on Australia’s climate and energy policy remains overwhelmingly negative, and there has been little improvement since 2017.

In September 2020, the Australian government announced it would pursue a “gas-fired recovery” from the COVID-19 pandemic, by incentivising the development of multiple new gas basins.[12] In the 12 months since that announcement, the Australian government has committed more than $2.2 billion in subsidies to the gas industry (see Appendix, Table 2).

Throughout 2020-21, the Australian Petroleum Production and Exploration Association (APPEA) lobbied extensively for a “gas-fired recovery”. A key pillar in APPEA’s advocacy throughout 2020, were the following four reports:

APPEA’s advocacy was hugely successful, and in its 2020 annual report, APPEA took full credit for the government prioritising new gas developments in its pandemic response:[17]

Before BHP suspended its membership of the QRC in October 2020, the QRC was also very supportive of the “gas-fired recovery”. The QRC published its “Resource Industry Recovery Agenda”[18] in June 2020, which called for government subsidies for new gas pipelines and incentives for coal and gas exploration.

The NSW Minerals Council also sought to exploit the pandemic in 2020, when it published its “Mining for the Recovery” report.[19] That report called for the fast-tracking of 21 new or expanded coal mines, claiming they were necessary for economic recovery.

The exploitation of the pandemic by APPEA, the NSW Minerals Council and the QRC is clearly at odds with the expectations communicated to BHP by its investors throughout 2020-21.

In addition to exploiting the pandemic, BHP’s industry associations undertook a range of other advocacy at odds with the Paris Agreement.

Unlike its peers in other jurisdictions, the API does not claim to endorse net zero by 2050.[20] Due to its appalling climate record, the risks are increasing for the API. In June 2020, the State of Minnesota filed a lawsuit against the API and other fossil fuel industry players for “a decades-long campaign to deceive the public about climate change”.[21]

In January 2021, oil major Total became the first major company to exit the API “due to disagreements over its climate policies and support for easing drilling regulations”.[22]

Throughout 2021, the API has opposed the Biden Administration's electric vehicle policy, stating that “in the US free-market economy the government shouldn’t push the market and consumers toward a specific policy outcome”.[23]

In July 2021, ExxonMobil lobbyists confirmed that oil majors used the API to defend the use of “forever chemicals”.[24]

Recently, the API has opposed the Securities and Exchange Commission’s proposal to mandate climate risk disclosure, including questioning the “practicalities” of Scope 3 emissions disclosure.[25] This appears to be inconsistent with BHP’s own transparency and its role in the development of the Task Force on Climate-Related Financial Disclosure[26] guidance.

In early 2021, APPEA updated its Climate Change Policy Principles, confirming its support for net zero emissions by 2050, while concurrently calling for the expansion of the gas industry.[27]

APPEA has steadily increased its advertising spend in recent years, primarily through the Bright-r campaign,[28] which promotes the use of fossil gas, especially domestic cooking and heating.

In July 2021, APPEA called for amendments to the Australian Renewable Energy Agency (ARENA) to allow it to invest in carbon capture and storage (CCS) in order to enable fossil hydrogen.[29]

Over the last couple of years, the MCA has sought to weaken the Environment Protection and Biodiversity Conservation Act,[30] calling for streamlined regulation, fast-tracking of new and expanded coal projects, and opposing the assessment of new projects’ greenhouse gas emissions.

In mid 2020, the MCA called for government subsidies for fossil fuel exploration.[31]

In February 2021, the MCA called for an amendment to Australia’s Clean Energy Finance Corporation, which would allow it to invest in coal-fired power generation,[32] coinciding with an identical proposal from Nationals Party MP Barnaby Joyce.[33]

In March 2021, the MCA opposed the EU’s proposed Carbon Border Adjustment Mechanism[34] and lobbied the European Commission to include fossil fuels with CCS in the EU taxonomy for sustainable activities.[35]

In May 2021, the MCA advocated for amendments to ARENA to enable it to invest in CCS.[36]

In February 2021, the NSWMC lobbied the NSW Deputy Premier to overturn the Independent Planning Commission’s rejection of a new metallurgical coal mine, despite the risks it would pose to Sydney’s drinking water catchment.[38]

In May 2021, the NSWMC campaigned during the Upper Hunter by-election in NSW,[39] encouraging candidates to express their support for thermal coal mining, and claiming that demand for Australia’s thermal coal would continue for “decades to come”.[40]

Chamber of Minerals and Energy of Western Australia (CME)

The CME notionally supports the Paris Agreement, but does not have a climate change policy.[41]

The CME supports the expansion of the gas industry in Western Australia,[42] including the Australian government’s “gas-fired recovery”.[43]

In March 2019, the CME opposed regulations from the Western Australia Environment Protection Authority (EPA) that would have required new emissions intensive projects to offset their emissions.[44]

US Chamber of Commerce (the Chamber)

While BHP may claim that the Chamber has improved its position on climate change in recent years, it continues to advocate for coal and LNG to be considered in the US climate change response.[45] It continued to lobby for the role of coal and LNG when the Biden Administration established its Nationally Determined Contribution upon return to the Paris Agreement.[46]

The Chamber has a dire track record on climate advocacy. Between 2015-2019 it led legal action against the US EPA seeking the repeal of the Clean Power Plan.[47] Prior to 2021 it lobbied to weaken fuel economy standards in vehicles[48] and methane regulations.[49]

The Chamber’s Global Energy Institute, which seeks to unite all stakeholders behind “common sense energy strategy”,[50] continues to run the Natural Gas Advantage campaign, which promotes fossil gas and understates its climate impacts.[51]

BHP’s own scenario analysis has concluded that ambitious efforts to mitigate climate change are in the best interests of its portfolio and its shareholders.

Despite committing to shareholders that it would monitor its industry associations and publish inconsistencies on its website,[52] BHP failed to identify any advocacy with which it disagreed in the 2020-21.

In 2020, BHP’s shareholders clearly communicated their expectations with regard to its lobbying on climate and energy policy. Unfortunately there has been insufficient progress from BHP’s industry associations, despite many years of engagement on this issue with ACCR and its shareholders.

As one of Australia’s largest companies, and one of the world’s largest miners, BHP occupies a unique position of leadership. It must use that position to advocate for ambitious emissions reductions before 2030, and ensure that its industry associations do the same.