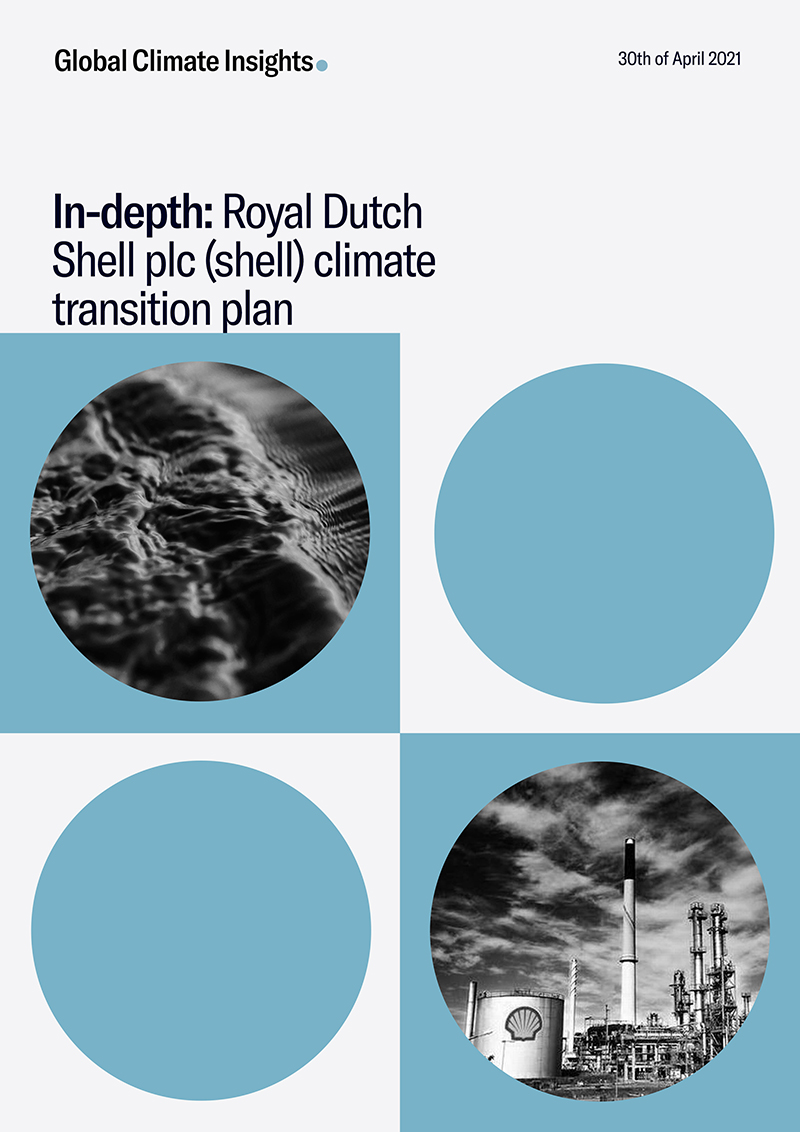 Subscribe to get the latest updates direct from Global Climate Insights

Is Shell serious about its climate transition plan?

Shell’s climate vote should assess the credibility of its plan in the next 10 years, and genuine action is lacking.

1. Why Shell’s emission reduction targets are not Paris-aligned

Oil and gas growth does not align with a 1.5 °C pathway

Shell’s intensity targets do not align with a 1.5 °C or Below 2°C pathway

Without an absolute emissions reduction target, investors must rely on existing tools that allow intercomparison between companies on their carbon intensity performance. One such tool is TPI’s sectoral decarbonisation benchmark, which provides a year-on-year transition target for oil and gas companies on an intensity basis. Though the benchmark is not 1.5 °C aligned (it is based on IEA’s below 2 degrees, B2DS, which roughly aligns with a global warming of 1.75 °C by 2100, i.e it is more lenient than 1.5°C), it is a way to measure whether companies meet the bare minimum of the Paris Agreement’s ambition of keeping global warming to less than 2°C.[7]

Shell’s intensity target falls short of meeting even the lowest requirement of emissions reduction for keeping temperatures below 2°C. This is partially a result of its high emissions intensity baseline (set in 2016 close to the peak of its production) and partially due to its lack of ambition in reducing absolute emissions in the next 10 years.

Using the TPI below 2 °C pathway for oil and gas, by 2030 Shell would need to reach an emissions intensity of ~43g CO2e/MJ, this compares to Shell’s target intensity of ~57g CO2e/MJ[8], implying Shell’s plan will miss a less than 2°C pathway by more than a third (32%). We have used TPI’s data on Shell’s intensity target as this aligns with TPI’s sector approach, and includes scope 3 emissions from Shell’s own products but not from third parties.

66% of Shell capital expenditure is misaligned with climate transition

Carbon Tracker has conducted analysis on Shell’s oil and gas upstream projects to assess how much of its capital expenditure is aligned with the Paris Agreement budgets. To do this it maps capital expenditure projects to climate scenarios including IEA’s B2DS, Sustainable Development Scenario, and excludes projects that are outside of the Stated Policies Scenario (STEPS - business as usual scenario) as it assumes these projects would not be sanctioned.

Analysis released as part of the CA100+ Net Zero Company Benchmark identified that $3.94bn of projects had been sanctioned in 2019 that are outside of IEA B2DS and of Shell’s potential capital expenditure (2020 to 2040) 66% is inconsistent with IEA B2DS (only 34% is consistent). We note this number would be much larger if it were to include capital expenditure outside of STEPS, which was 30-40% as last reported by Carbon Tracker in October 2020[9].

The ~US$4.2bn LNG Canada project (train 3 and 4), which is central to Shell’s gas expansion plans, is deemed incompatible with both the IEA B2DS and the higher warming Sustainable Development Scenario (SDS)[10]. The other asset contributing to Shell’s gas expansion is Nigeria LNG (Final Investment Decision taken May 2020), which could be cheaper and therefore not outside of IEA B2DS.

2. How to assess a credible use of carbon offsets and CCS?

To keep within a 1.5 °C pathway the focus for credible climate transition plans must be on actual, permanent emission reductions. With this in mind, the significance of Shell’s intended use of offsets i.e. nature-based solutions (NbS) and Carbon Capture and Storage (CCS) raises a number of concerns.

Shell aims to reduce the carbon intensity of its business by ~15g CO2e/ MJ from 2019 to 2030.  Given the large contribution of CCS (25Mt p.a by 2035) and NbS (120 Mt p.a by 2030) we have sought to quantify the importance of these abatement options to Shell’s emissions intensity reduction.

If we use Shell’s 2019 emission intensity of 78g CO2e/ MJ (prior to COVID-19) and assume that Shell implemented its CCS and NbS goals at that time, NbS would provide a ~6g CO2e/ MJ (~40%) reduction and CCS ~1g CO2e/ MJ (~10%) reduction. Shell would be halfway to its 2030 target. This highlights two things, the vulnerability of Shell’s targets if it is unable to implement NbS and CCS in the timeframe it plans, and, actions taken by Shell to reposition its business and operations are not the driving force in reaching its targets.

Shell has disclosed some of the activities it will be undertaking to contribute to our estimated 8g CO2e/ MJ  reduction (~50%) in its emissions intensity target - we have outlined them in our table summarising Shell’s climate transition plan commitments (section on Decarbonisation strategy 2030). Shell outlines its example energy transition milestones to get to 2030, identifying low-carbon power (renewable electricity and EV charge points) as the most significant contributor, followed by low-carbon fuels (blue and green hydrogen, biofuels). However, the details are very light and with no quantification it is very difficult to assess the credibility of these actions.

How do we assess the appropriate use of these NbS and CCS? Quality offsets and affordable, effective CCS have a role in reducing the carbon intensity of oil and gas extraction, processing and consumption as we phase-down the industry but they are not a mechanism to allow the industry’s expansion and prolong use of fossil-fuels. Due to the inherent limitations and risks, their use must start as soon as possible and have a clear end date. The following sections provide specific commentary on the considerations for nature-based solutions and CCS deployment for Shell.

Nature-based solutions (NbS) rely on removal of CO2 from the atmosphere via redevelopment or protection of the natural environment. By 2030 Shell expects that its own portfolio of NbS will be sufficient to meet the carbon credit needs of its customers. The volume of voluntary carbon credits traded globally in 2019 is estimated to be 104 Mt, ~15 Mt less than Shell’s NbS target[11].

For NbS, apart from requiring clear end dates on use, some of the key issues are the long lead times required to fully establish projects, ecosystem considerations, and the size and credibility of the schemes. Shell appears to be focused on addressing the credibility; how credible the schemes are will only become clear over time as any unintended impacts on ecosystems and communities eventuate.

With regard to size, the amount of nature-based solutions Shell plans to use would equate to a non-conifer forest the size of Washington State (which needs to be mature by 2030)[12]. If all oil and gas companies adopted this approach, the land size required would become continental. Instead of placing so much weight on offsets to address scope 3 emissions, more investment is required to work with customers to establish the infrastructure to transition to zero carbon energy sources.

Shell’s investment: In 2020 Shell invested US$90m in development and purchase of NbS and expects to invest US$100m each year.

Carbon Capture and Storage is the process of capturing CO2 from industrial production or the atmosphere for permanent storage, most commonly in underground reservoirs. Carbon Capture Utilisation and Storage (CCUS), also involves capturing carbon from industrial processes but it is used for industrial purposes, most commonly injection into oil wells for enhanced oil recovery (EOR). Unfortunately use of captured carbon for EOR can result in significant re-emission of the CO2 into the atmosphere, with some CCS/EOR projects having retention rates below 30%[13].

Currently CCS facilities have the potential to capture and permanently store around 40 Mt of CO2 every year[14]. The table below shows the top 6 operational CCS facilities globally (this includes Shell’s Gorgon CCS project JV), highlighting that 76% of CO2 captured from these projects is used for EOR rather than permanent geological storage.

In FY20 Shell stored ~1Mt of CO2 via CCS and states it currently has ~4.5 Mt of capacity. It is proposing to have an additional 25Mt p.a in capacity of CCS by 2035 but it does not yet have the CCS assets that will be able to store the carbon and has not disclosed which facilities or in what part of the value chain it plans to use CCS. Disclosure of these details will better enable the assessment of how effective CCS could be in assisting Shell’s GHG reduction efforts.

A 2030 target should only include the CCS facilities that are operational and working today (or in the next year) with clear disclosure of assets and addressable emissions. The rationale for this is that nine years does not allow a lot of time to effectively deploy a new CCS facility and the risk of projects not progressing or working is high.

Gorgon Gas Plant and CCS project is operated by Chevron and owned as part of a joint venture with Exxon (25%), Shell (25%), Osaka Gas, Tokyo Gas and JERA. The gas plant began operation in 2016 and can produce up to 15.6Mt LNG (the largest in Australia). While the CCS facility began injection in 2019 a key part of the system is not working. The WA government has capped CO2 injection at one third of its capacity until the issue is remedied with the remaining CO2 being released into the atmosphere[16]. The Gorgon CCS plant was only ever designed to capture up to 40% of CO2 emissions from the plant, leaving >60% unabated, along with all scope 3 emissions[17]. That percentage capture is currently closer to 13%.

Costs: Estimated to be US$2.4bn[19]. $60m in funding was provided by the Australian government on the condition that the site stores 80% of CO2 it extracts in reservoirs.

We have reviewed Shell’s February disclosure to see how it may impact the CA100+ Net Zero Company benchmark assessments that were completed earlier this year, relying on Dec-2020 data.

See our chart detailing where Shell's Net Zero Benchmark could change on page 10 of the PDF report.

We have set our view of Shell’s current climate commitments against the key disclosure areas included in the CA100+ Net Zero Company Benchmark.

We review how Shell would be assessed against our draft ACCR 2021 climate vote guidelines for high carbon emitting sectors. As can be seen from the table below Shell would not be able to meet the key criteria, particularly Shell would need clear absolute emission reduction plans in the short (2025) and medium-term (2035).

Apr 2021 values are those in the Energy Transition report.