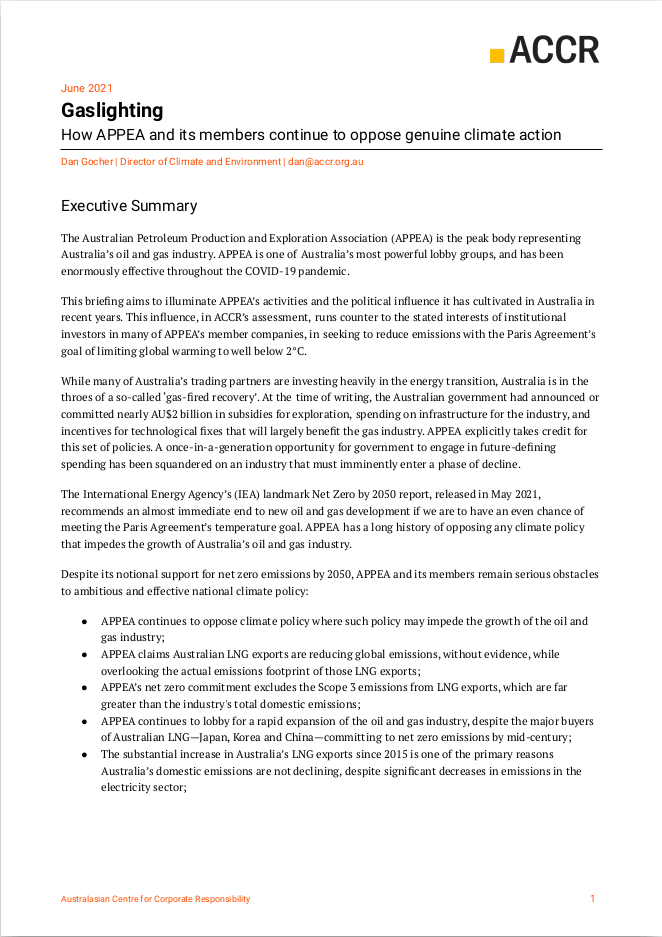 The Australian Petroleum Production and Exploration Association (APPEA) is the peak body representing Australia’s oil and gas industry. APPEA is one of Australia’s most powerful lobby groups, and has been enormously effective throughout the COVID-19 pandemic.

This briefing aims to illuminate APPEA’s activities and the political influence it has cultivated in Australia in recent years. This influence, in ACCR’s assessment, runs counter to the stated interests of institutional investors in many of APPEA’s member companies, in seeking to reduce emissions with the Paris Agreement’s goal of limiting global warming to well below 2°C.

While many of Australia’s trading partners are investing heavily in the energy transition, Australia is in the throes of a so-called ‘gas-fired recovery’. At the time of writing, the Australian government had announced or committed nearly AU$2 billion in subsidies for exploration, spending on infrastructure for the industry, and incentives for technological fixes that will largely benefit the gas industry. APPEA explicitly takes credit for this set of policies. A once-in-a-generation opportunity for government to engage in future-defining spending has been squandered on an industry that must imminently enter a phase of decline.

The International Energy Agency’s (IEA) landmark Net Zero by 2050 report, released in May 2021, recommends an almost immediate end to new oil and gas development if we are to have an even chance of meeting the Paris Agreement’s temperature goal. APPEA has a long history of opposing any climate policy that impedes the growth of Australia’s oil and gas industry.

Despite its notional support for net zero emissions by 2050, APPEA and its members remain serious obstacles to ambitious and effective national climate policy:

APPEA’s influence has increased dramatically with the growth of the LNG export industry, putting it alongside the coal and iron ore industries in terms of political clout. APPEA’s influence is cemented through relationships with both major Australia’s political parties, high level access to policy-makers, and the revolving door of staff among APPEA, its members and government offices.

For Australia’s future, and for the planet, the stakes could not be higher. Climate-aware investors in APPEA’s member companies must now assertively seek to curtail lobbying that is inconsistent with limiting  global warming to well below 2°C.