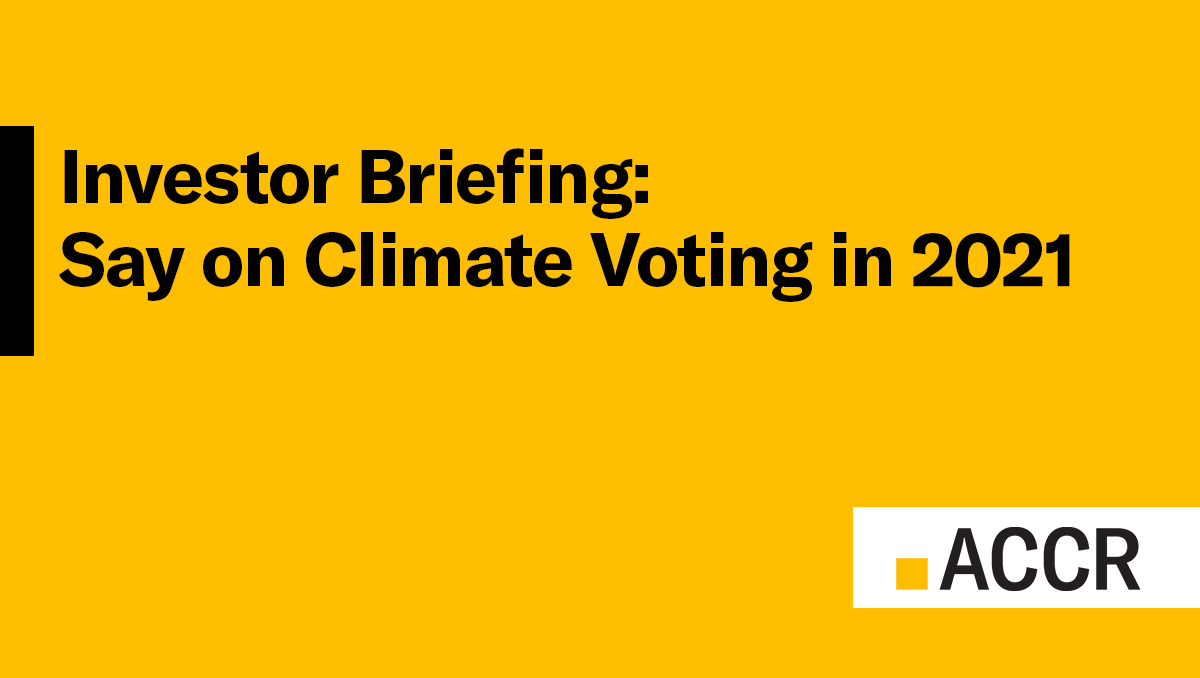 The ‘Say on Climate’ mechanism, launched in late 2020, aims to compel listed companies to develop and implement Paris-aligned transition plans, with increased accountability against those plans through annual shareholder votes.

In 2021, there were 19 votes on Say on Climate resolutions at 17 companies’ annual general meetings (AGM) in nine jurisdictions: Australia, Canada, France, the Netherlands, Spain, South Africa, Switzerland, the United Kingdom (UK) and the United States (US). On average, these resolutions obtained 95.2% shareholder support.

This level of investor support for companies’ climate plans in 2021 suggests that companies were rewarded for accountability, transparency, for being first movers or for their “direction of travel”, rather than the strength of their climate plans. None of the 17 companies have aligned their emissions reduction targets and capital allocation with a 1.5℃ pathway.

Investors should be transparent about how they assess and vote on companies’ climate plans, and press companies for 1.5℃ alignment.

The latest IPCC report underscores the “brief and rapidly closing window of opportunity to secure a liveable and sustainable future for all”[1] if global warming is not limited to 1.5℃. Human-induced climate change has already affected weather and climate extremes around the world. These climate risks impact all sectors and asset classes, significantly affecting investors with broad market exposure including superannuation funds and global investment managers.

ACCR advocates for asset owners such as super funds, and investment managers to use every tool available to achieve the most ambitious climate outcomes when engaging with companies on climate change—including how they vote on Say on Climate resolutions.

It is imperative that companies set ambitious decarbonisation targets and strategies, and align their capital expenditure and lobbying with 1.5℃ pathways. Through the power of proxy voting, shareholders can send a clear message to companies to mitigate systemic climate change.

Say on Climate was pioneered by the Children’s Investment Fund Foundation (CIFF) in the UK, and was actively supported by ACCR, CDP and ShareAction. ACCR shares the view of CIFF founder Sir Christopher Hohn that the Say on Climate mechanism “can be as powerful as investors want it to be”.[2]

The Say on Climate mechanism is based on three key commitments from companies:

ACCR examined the proxy voting records of the largest 30 Australian superannuation funds by assets under management (AUM)[4] and the 30 largest global investment managers by AUM[5] on the 19 Say on Climate resolutions that went to a vote in 2021 across nine jurisdictions: Australia, Canada, France, the Netherlands, Spain, South Africa, Switzerland, the UK and the US.

To the best of our knowledge, these were all of the Say on Climate resolutions on climate transition plans held in the calendar year 2021. Proxy voting data was obtained from Proxy Insight.[6]

Climate Action 100+ (CA100+) Net Zero Company Benchmark data for the relevant companies was sourced from the CA100+ website and emissions reduction targets for the remaining companies were collated from the companies’ websites and reporting suites.

ACCR analysed the proxy voting records of the 30 largest Australian superannuation funds, representing more than $2 trillion in AUM and 87% of APRA-regulated assets under management. Of these 30 funds, 20 were shareholders in companies that held Say on Climate votes in 2021, and disclosed their proxy voting records for these resolutions.

The 10 remaining funds that make up the 30 largest funds have not disclosed a complete proxy voting record for 2021. These funds are listed in the Appendix (see Note 1).

The 19 Say on Climate resolutions that were put to a vote by management in 2021 were supported, on average, by 95.2% of shareholders.

FIGURE 1. SUPPORT FOR SAY ON CLIMATE RESOLUTIONS IN 2021 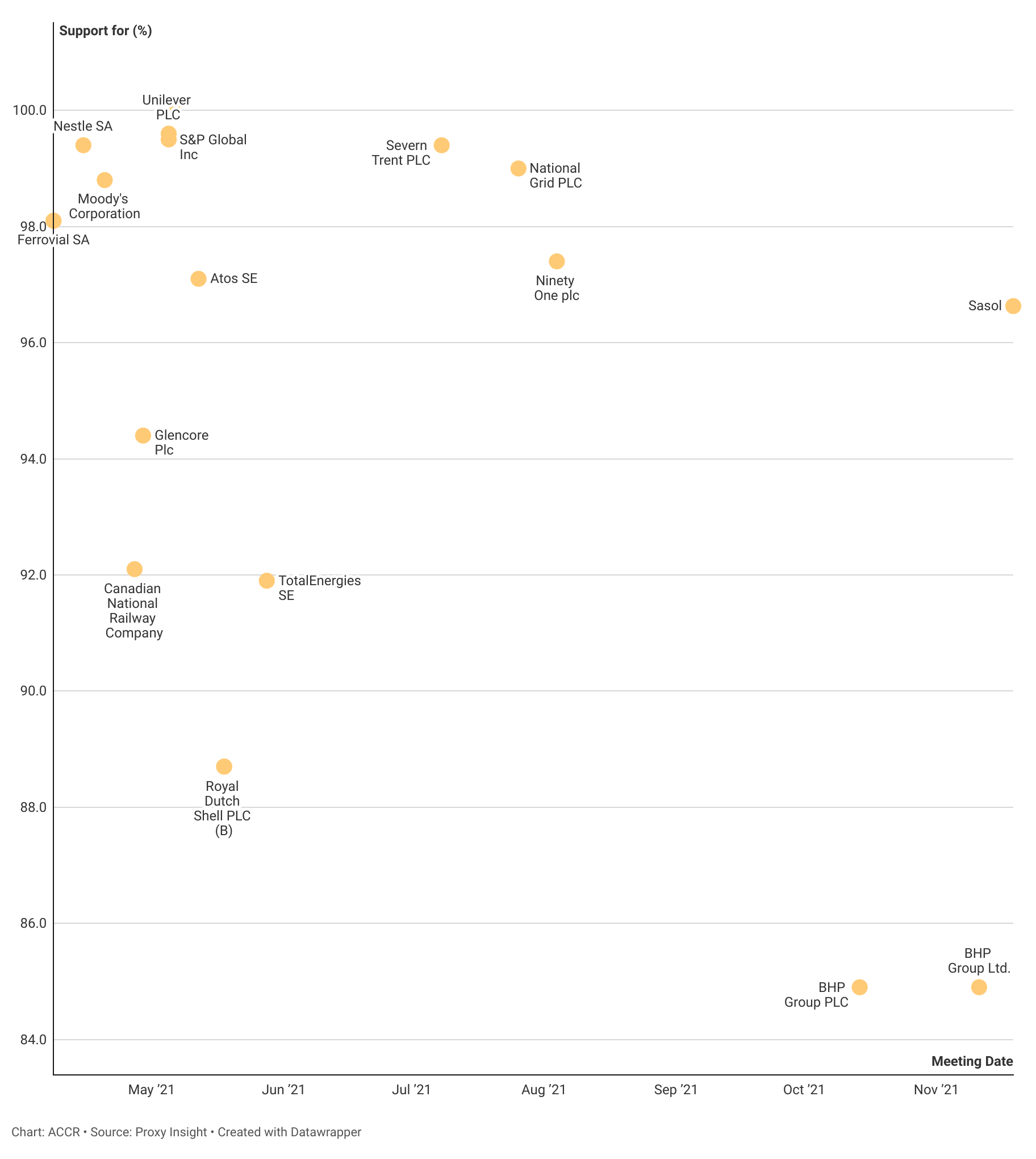 The vast majority of Say on Climate resolutions were supported by more than 90% of shareholders in 2021.

Shell and BHP are two of the most carbon-intensive companies to have held Say on Climate votes, and both have been the subject of investor scrutiny and climate campaigns for several years, which may explain the lower level of support.

Notably, BlackRock and Vanguard supported all 19 Say on Climate resolutions held in 2021.

Dimensional supported the fewest number of Say on Climate resolutions in 2021, supporting just 15.79%, though it abstained from on 16 of 19 votes. Only one superannuation fund and one other investment manager supported 50% or less of the Say on Climate resolutions in 2021: Colonial First State (35.29%) and Charles Schwab (50%). Colonial First State abstained on 8 of 17 votes. Charles Schwab abstained on 5 of 12 votes.

Overall, 84.9% of BHP Group (Ltd & Plc) shareholders supported its Climate Transition Action Plan. Only three of the Australian superannuation funds analysed voted against BHP’s plan: Aware Super, Cbus Super and Vision Super. Interestingly, HostPlus voted for BHP’s plan at the Plc AGM in London in October 2021, before voting against the same plan at the Ltd AGM in Melbourne in November 2022.

Were the companies’ plans deserving of support?

Launched in December 2017, Climate Action 100+ is an investor-led coalition engaging with the world’s largest corporate emitters. The coalition includes 700 investors globally and represents $68 trillion in assets under management.[8]

For the purposes of this analysis, credible company climate action plans were those that were consistent with the Climate Action 100+ Net-Zero Company Benchmark (‘Benchmark’), published in early 2021. The Benchmark evaluated company performance against 10 indicators, including emissions reduction targets, capital expenditure, climate governance, lobbying and climate-related financial disclosures.

Note: Indicator 9, “Just Transition” was excluded from this analysis as this assessment has not been disclosed through the benchmark. Source: Climate Action 100+, 2022.

None of the eight CA100+ companies that held a Say on Climate vote in 2021 were aligned with all Benchmark indicators (see Figure 2, Appendix Table A).

All eight CA100+ companies have announced an ambition or target to achieve net zero emissions by 2050 or sooner (Indicator 1). However, National Grid (UK) and Sasol (South Africa) were partially aligned on Indicator 1, as the companies do not include Scope 3 emissions in their net zero targets.

Only four of the eight CA100+ companies have long-term emissions reduction targets that include Scope 1 and 2, and material Scope 3 emissions, aligned with the goal of limiting global warming to 1.5℃ (Indicator 2). Of these companies, only two, Nestle and Unilever, have both medium- and long-term targets aligned with the Benchmark indicators (Indicators 2-3), and Nestle is the only company that has a short-term emissions reduction target aligned to a 1.5℃ pathway (Indicator 4).

Only one of the eight CA100+ companies, BHP Group, was found to have an aligned decarbonisation strategy (Indicator 5). However, this indicator was based on the company having a strategy to meet its emissions targets, regardless of the ambition of those targets. ACCR's analysis found that BHP’s 2021 Climate Transition Action Plan (CTAP) was not aligned with a 1.5℃ pathway.

On average, the eight CA100+ companies that held Say on Climate votes in 2021, received 92.81% support from shareholders.

The remaining nine companies (non-CA100+) that held Say on Climate votes in 2021 were Atos, Aviva, Canadian National Railway, Ferrovial, Moody’s Corporation, Ninety One, S&P Global, Severn Trent and Vinci. While these companies are not included in the CA100+ Net Zero Company Benchmark, we have collated their climate commitments (see Appendix Table B).

However, only six of the nine non-CA100+ companies have short- or medium-term emission reductions targets that encompass Scope 1 and 2, and material Scope 3 emissions.

On average, the nine non-CA100+ companies that held Say on Climate votes in 2021, received 97.83% support from shareholders.

In 2021, Say on Climate resolutions received 95.2% overall shareholder support. While it was the first year the mechanism was in action, this level of support suggests investors rewarded companies for being “first movers”, for their commitment to accountability and transparency, and/or their “direction of travel”.

Of the 17 companies that provided a Say on Climate vote in 2021, none have aligned their emissions reduction targets and capital allocation with a 1.5℃ pathway. Moreover, none of the CA100+ focus companies that held Say on Climate votes in 2021 were aligned with all indicators in the Climate Action 100+.
The Climate Action 100+ and the Transition Pathway Initiative[10] provide useful measures by which to assess companies’ climate performance, but investors should be prepared to draw information from multiple sources in order to determine whether a company’s climate plan is worthy of support. Alignment with a 1.5℃ pathway should be the standard by which companies’ climate plans are judged.

Rather than rewarding companies for their “direction of travel”, we encourage investors to assess climate plans on their alignment with a 1.5℃ pathway by using the suggested criteria below:

Similarly, CIFF has outlined what it considers to be essential components of a climate action plan:[11]

Considering the urgent need to decarbonise, ACCR encourages investors to raise their expectations of companies and ambition when voting on company climate plans in 2022.

See the Appendix (Table C) for the list of known companies providing a Say on Climate vote in the months ahead.

NOTE 1: Australian super funds not included in this analysis include Commonwealth Super Corporation, MLC, ANZ, IOOF, Macquarie, Spirit Super, Netwealth Super, LGIAsuper, CommBank Group, and HUB24 Super Fund. These funds were excluded from this analysis due to a lack of proxy voting disclosure, or the fund did not hold any of the 20 companies that held Say on Climate votes in 2021. CommBank Group Super, MLC and Spirit Super disclosed proxy voting data for Australian shares only, for the financial year to 30 June 2021. This was insufficient data to include in this analysis.

TABLE A. CA100+ BENCHMARKING ASSESSMENT OF THE FOCUS COMPANIES WITH SOC RESOLUTIONS IN 2021 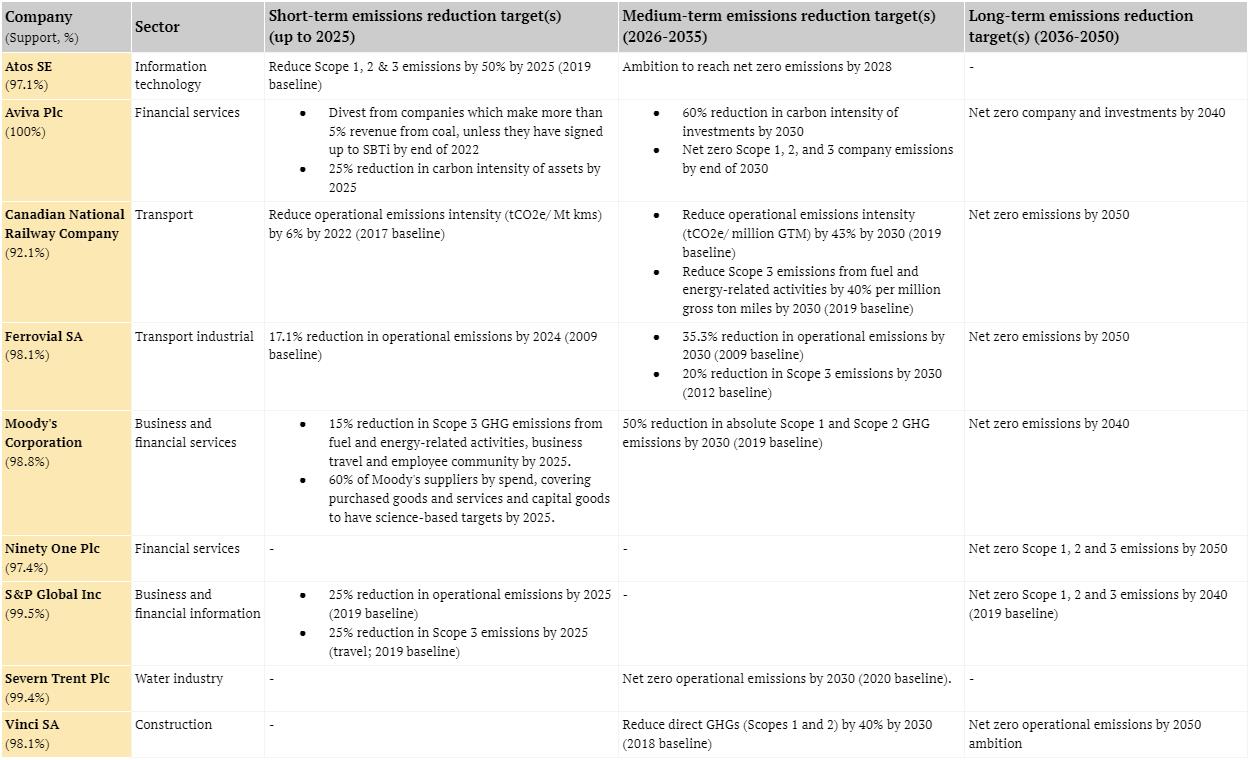 TABLE C. COMPANIES PROVIDING A SAY ON CLIMATE VOTE IN 2022