ACCR has engaged with AGL Energy (AGL) for many years on its management of climate risk, decarbonisation strategy and governance of industry associations.

In 2020, ACCR filed a shareholder resolution with AGL that sought to align the closure dates of the Bayswater and Loy Yang A coal-fired power stations with AGL’s own 1.5°C scenario analysis. It was supported by ~20% of shareholders.

ACCR has met with AGL board members and executives several times throughout the year. AGL is yet to set Paris-aligned emission reduction targets. Central to Paris-alignment is the early closure of coal-fired generation assets, which AGL argued in 2020 was economically unfeasible and now argues is not possible due to political pressures and electricity system security needs.

AGL announced in March 2021 that it would demerge into two entities: Accel Energy and AGL Australia.[1]

Accel Energy will retain Loy Yang A, Macquarie Generation and Torrens Island thermal generation assets. It will also operate the Macarthur, Hallett, Wattle Point and Oaklands Hills wind farms, with the potential to develop a further 1600MW of new wind projects. Accel will also retain the major industrial customers, including contracts with aluminium smelters in NSW and Victoria.

Accel Energy will retain a minority interest of 15-20% in AGL Australia.
AGL anticipates the proposed demerger will be completed by 30 June 2022, subject to shareholder and regulatory approval.

Shareholders request the Board disclose, in association with forthcoming demerger scheme documents:

Nothing in this resolution should be read as limiting the Board’s discretion to take decisions in the best interests of our company or the proposed demerged companies, or the Board’s ability to limit the disclosure of commercial-in-confidence information.

ACCR does not necessarily expect the information requested in this resolution to be included in the demerger scheme documents, but that it is provided at an appropriate time to inform shareholders’ decision-making on the proposed demerger.

AGL’s response to the resolution

In its notice of meeting, the board of AGL declined to support the resolution for the following reasons:[2]

Coal-fired generation is being increasingly undermined by the penetration of renewables into the grid, driving prices lower (see below). As coal generators age, they are becoming increasingly unreliable, creating system security challenges for AEMO.[5]

AGL is implying that a transition over 10-15 years would create “uncertainty”, when in fact it would do the opposite, by signalling to the market that further investment in renewable generation and storage is required. ACCR is not arguing for closure in the short-term.

We encourage investors to support the resolution for the following reasons.

The demerger should not mean delay

The proposed demerger should not delay AGL’s transition nor the broader energy transition in the National Electricity Market (NEM).

AGL has committed the demerged entities to each publish a “detailed climate change roadmap including specific decarbonisation targets”.[8]

AGL has also disclosed on its website that it “anticipates providing more information about the carbon transition strategies of each business in the demerger scheme documents.”[9]
Accel Energy’s “baseline” emissions reduction trajectory is as follows:[10]

AGL Australia is expected to be listed as “carbon neutral for scope 1 and 2 emissions, with a clear pathway to carbon neutrality for all sources of electricity”. Carbon neutrality, at least in the short-term, will be delivered via carbon offsets.

AGL also acknowledged the “need to reduce scope 3 emissions” for AGL Australia. It is unclear whether the roadmap for AGL Australia will be aligned with the Paris Agreement, with the future role of gas generation and retail being the primary challenges.

Existing targets are not Paris-aligned

The Intergovernmental Panel on Climate Change (IPCC)’s Special Report on Global Warming of 1.5°C concluded that with only limited carbon capture and storage, the use of coal in electricity generation must fall globally by 80% below 2010 levels by 2030.[12] Furthermore, OECD nations should end coal use entirely by 2030, and the proportion of electricity generation from renewables globally will need to increase to 58-60% by 2030, and 77-81% by 2050.[13]

The International Energy Agency’s recently published ‘Net Zero by 2050’ report reached similar conclusions to the IPCC. It recommended that all unabated coal plants in advanced economies must be phased out by 2030 and in all economies by 2040.[14]

A primary contributor to these lower prices is the ongoing penetration of rooftop solar and large scale renewable energy projects. This growth is largest in the markets where AGL’s coal-fired power stations are located: NSW and Victoria (see Figure 2).[18] While prices have recovered in recent months, the long-term trend for prices is downward.

In August 2021, AGL announced a full year statutory loss of $2.06 billion, which included impairments on its thermal generation assets, onerous wind contracts and an increase in rehabilitation provisions.[19] Underlying EBITDA declined 18% to $1.67 billion and underlying net profit after tax (NPAT) declined 34% to $537 million. Electricity demand was impacted by “lockdowns, mild weather and increasing penetration from rooftop solar.”[20] AGL has forecast a 22% decline in underlying EBITDA in FY22, and a 46% decline in underlying NPAT.[21]

In May 2021, Chair of the Energy Security Board (ESB), Kerry Schott told the Smart Energy Conference:
“The coal generators are going broke. So those of you who are worried about coal retiring, please don’t. It’s happening, and it’s happening for commercial reasons.”[22]

The Australian Government is currently considering the introduction of a capacity mechanism (referred to as the physical retailer reliability obligation or PRRO).[23] Capacity markets are designed to pay generators for their dispatchable capacity, rather than the electricity they produce.

The Smart Energy Council has described capacity markets as the “last gasp of keeping coal-fired power stations open in Australia” as it would “give them payments just for being there”.[24]

It was recently reported that AGL CEO Graeme Hunt supports capacity markets.[25] It is likely that capacity payments would offset the declining profitability of AGL’s coal-fired power stations, further delaying their closure. Should the PRRO proceed, the pressure on Australia to commit to more ambitious climate targets will render this policy vulnerable to change.

As coal-fired power stations age, reliability declines and the cost of maintenance increases. According to AEMO, the growing amount of renewable energy generation in the grid increases variability, resulting in “an increased risk of forced outages”[26] of thermal power stations. Furthermore, “the reliability of the aging thermal generation fleet has deteriorated and the warming climate has increased the risk of extreme temperatures and high peak demands”[27].

Chair of the ESB, Kerry Schott described the problem of trying to cut maintenance costs (‘sustaining’ capital expenditure):
“If you are a commercial operator of a coal generator, you’ll start spending less on maintenance because it’s not worth it. Which means that you’re liable to become more unreliable, and you are likely to not operate as well as you used to, and you will stop sooner.”[28]

As previously mentioned, Accel Energy will retain the contracts with AGL’s largest industrial customers, including aluminium smelters in NSW and Victoria.

Over the medium-term, due to cost and decarbonisation pressures such as carbon border adjustment mechanisms, Accel’s industrial customers will decarbonise of their own accord. Even if Accel manages to retain the customers, the core expectation will be that zero carbon electricity is sourced, further eroding the business case for its coal-fired power stations.

In August 2021, Tomago Aluminium (NSW)—AGL’s single largest customer—announced that it would source the vast majority of its electricity (>95%) from renewable sources by 2029.[29]

There is a clear expectation from Climate Action 100+ signatories and climate-aware investors generally, that all emissions intensive companies set Paris-aligned targets, disclose a credible decarbonisation strategy and align their capital allocation with that strategy. 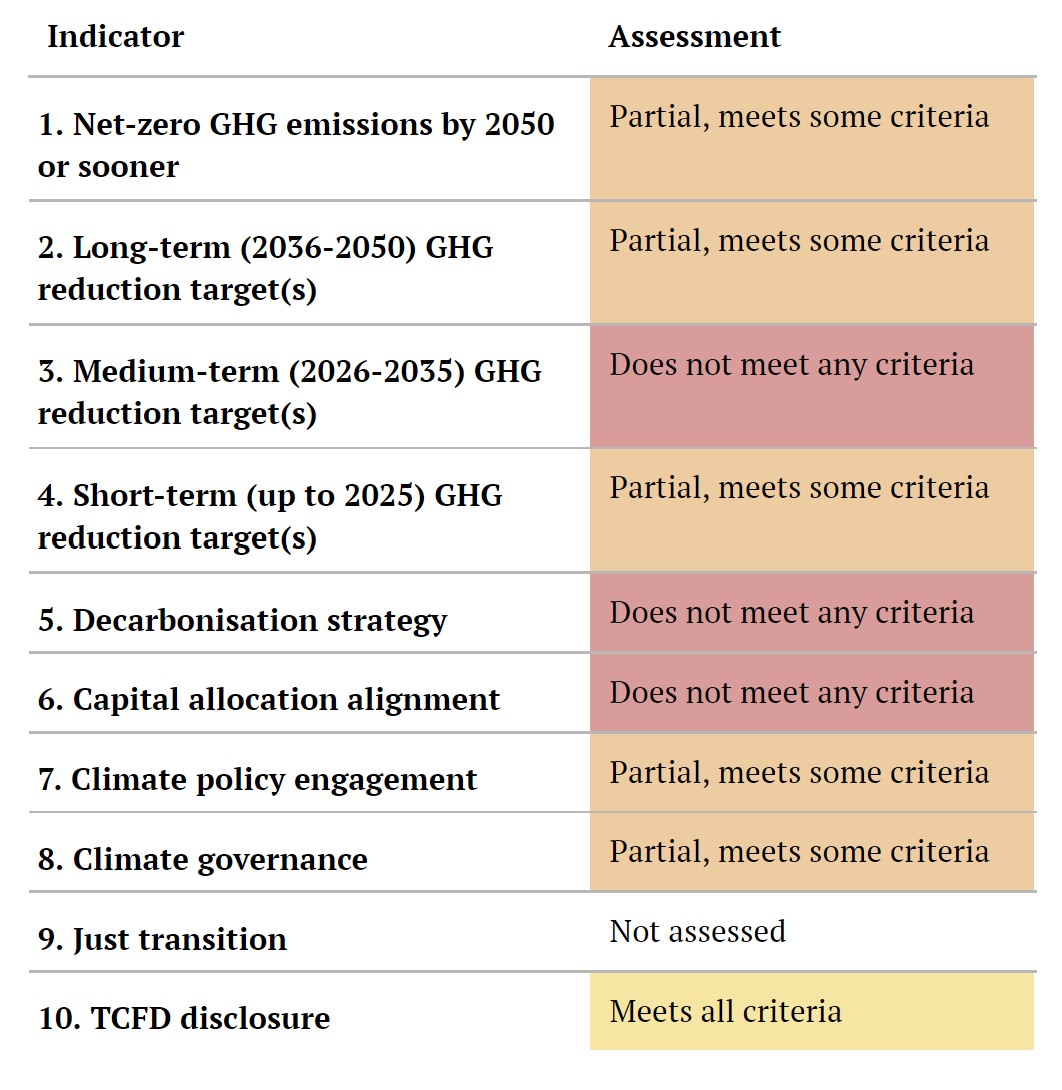 AGL’s capital allocation over the last several years has not sufficiently accelerated the energy transition or significantly reduced emissions.

AGL currently includes three carbon transition metrics in long-term incentives (25% in FY22): controlled emissions intensity, controlled percentage renewable and storage electricity capacity, and the percentage of total revenue derived from green and carbon neutral products and services.[36] These metrics are unlikely to drive emissions reductions, as they are not relative to AGL’s peers or the rest of the market.

While the remuneration structures of Accel Energy and AGL Australia are yet to be determined, executives in both companies must be incentivised to accelerate the transition to zero emissions, using measures that are comparable to peers and the NEM.

The resolution seeks commitment from the AGL board to align Accel Energy and AGL Australia with the Paris Agreement, whilst allowing the demerged companies the flexibility to determine their own paths, and to provide certainty to workers.

AGL has already committed to disclosing details on the climate transition plans for both Accel Energy and AGL Australia in the demerger scheme documents.

Paris-aligned targets, rather than hard closure dates, allows Accel Energy the flexibility of “seasonally cycling” and potentially mothballing units, as its executives suggested in March 2021.[37]

A clear and credible transition strategy will provide workers with certainty, rather than facing an abrupt transition forced on them by the market. AGL must ensure that workers and the communities it operates in are treated fairly by providing retraining or reassignment to all affected staff.

ACCR urges shareholders to vote for this proposal.